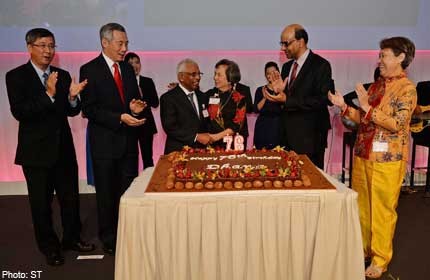 SINGAPORE - PrimeMinister Lee Hsien Loong led the tributes to newly retired Temasek Holdings chairman S. Dhanabalan last Tuesday night, saying Singapore has been fortunate to have had leaders like him who led with conviction and dedication.

Mr Dhanabalan's strong conviction was what made him valuable as a Cabinet minister, Mr Lee said, as he was prepared to voice his disagreements with policies and also searched his conscience to "do the right thing".

Speaking at a dinner at the Ritz-Carlton hotel to mark Temasek's 39th anniversary, Mr Lee told the audience of 350 guests: "Singapore has been lucky to have had stewards like Dhana to take care of our affairs. They believe in what they are doing. They dedicate their hearts and souls to the task."

Mr Dhanabalan stepped down as Temasek chairman last week after 17 years at the helm of the investment company. That marked the end of a career spanning over five decades in the private sector and in politics, 15 of them as a minister from 1978 to 1993.

Mr Lee recalled how Mr Dhanabalan had long resisted the idea of Group Representation Constituencies, as he felt that people would vote based on a person's character and abilities rather than on race.

But he eventually concluded that it would be many years before race "would cease to matter in Singapore", and that it was important to safeguard minority representation in Parliament.

In 1990, when the Government was drafting a Bill on maintaining religious harmony, Mr Dhanabalan helped the Cabinet work out a "practical and reasonable approach" to a highly sensitive issue. His support for the Bill helped it to be accepted by religious groups and the public. "This was his value as a minister - he spoke and acted out of conviction, and people knew that."

The Prime Minister's remarks come after his recent statements about the need for Singapore to get its politics right if it is to succeed. This, he had noted, included being able to draw into Government good people prepared to take decisions in the nation's long-term interest.

Last Tuesday night, Mr Lee also described Mr Dhanabalan as a "good friend and trusted colleague", and an "able minister and wise adviser". He retired from politics in 1992, but when both deputy prime ministers were diagnosed with cancer, he returned to serve for a year, before joining Temasek as chairman in 1996.

Mr Dhanabalan, who turns 76 on Thursday, said he was "overwhelmed" by the tributes and quoting the Bible, said "we have only done what we should do".