PN Balji: 3 steps to disaster in the Ivan Lim affair

The speed with which the Ivan Lim affair played out shows how even People's Action Party (PAP) politics is not a safe route to fame and fortune.

There are three milestones in Lim's torturous journey that show that you enter politics, even if you are an establishment person, at your own risk.

When a personal crisis hits, you are on your own, no safety blanket.

First, as the allegations against the PAP candidate hit the fan, the party's first assistant secretary-general, Heng Swee Keat, pushed him publicly to respond.

That gave the impression, to some at least, that this was a battle Lim had to fight on his own.

The DPM could have said the party will get back with a response soon. That way Heng would have shown that it would be a collective decision and not an individual one.

Second, Lim had no choice but to rush out with a statement.

Instead of showing some kind of contrition, he was seen as digging his heels.

As the online storm grew with more of his former National Service (NS) mates churning out examples of his "arrogant and elitist" behaviour, Lim came out with his second statement announcing that he was pulling out of the election race but rejecting the allegations by his former NS buddies. 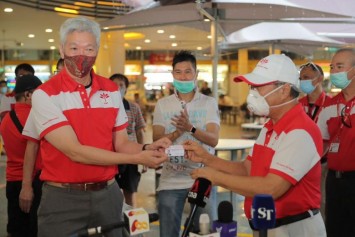 Lim said that with the official campaigning just three days away, he didn't want his party's strategy of making the Covid-19 battle the central theme to be hijacked.

Third, the unkindest cut of all happened when the PM Lee Hsien Loong accepted Lim's resignation by saying that there was not enough time to hold a full-blown inquiry.

"The allegations spread like wildfire online, eclipsing the serious life and death issues we must grapple with," he said.

A little dramatic, I must say.

Left unsaid was that the Ivan Lim affair was overshadowing the PAP's manifesto, which was announced by the PM himself a couple of hours earlier.

Chua Chin Hon, former Straits Times journalist and now in the business of analysing data, put out a post to show this. There was a nine-fold gap between Facebook posts related to the Ivan Lim affair and those linked to the PAP manifesto on Saturday.

He concluded: "[The gap] shows you how the online conversation had gone in a disastrous direction for the ruling party."