After a Scoot flight to Shenyang, China, was delayed, followed by a change of aircraft which led to insufficient seats, 12 passengers were left stranded at Changi Airport for more than four hours.

The incident happened on Sunday (July 30) at around 2am, at Changi Airport Terminal 2, reports Shin Min Daily News via Lianhe Zaobao.

The son of an affected passenger told reporters that his 65-year-old father who had been in Singapore for the last two years, was intending to head back to Shenyang to seek medical treatment and visit relatives.

However, his father, among 11 others, were told that their flight would be delayed till 3 days later. 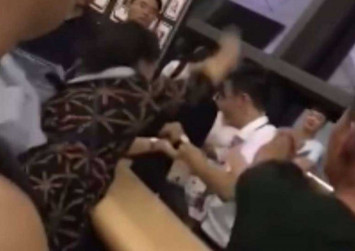 Said the man: "The flight was scheduled to fly at 5.30am, and we arrived at around 2.30am so we would not be late, taking into account the check-in procedures."

When the father and son went to the check-in counter they were told that the aircraft has been changed to a smaller model, and that the seats were already filled.

As such, he was unable to board the flight.

The frustrated man continued: "The employee told us that the next flight will be in three days and that another 11 passengers were also affected.

"The affected passengers asked for compensation in light of the change, but the employee was rude and chided us for blocking the way.

"She then called the police."

The police were alerted and officers arrived to mediate the situation, with both parties calming down.

However an hour later, a female passenger attempted to take a video of the situation, but was told by an employee to stop and delete the video on the spot.

He added that the employee's 'hardball attitude' and 'unwillingness to co-operate' prompted the passengers to call the police as well.

After a four-hour-long negotiation, the passengers were finally told at 6am that they would be compensated S$350 each, as well as one night of accommodation.

A 30-year-old female passenger revealed that according to the terms of agreement, the passengers were offered either to fly to Tianjin, China on the day itself and be offered S$250 in compensation, or wait three days in Singapore for a flight to Shenyang, and be offered S$350, along with a night of accommodation.

Said the passenger: "I chose to stay in Singapore for three days.

"Some kind passengers were worried that the S$350 compensation wouldn't be enough for the other two days of hotel accommodation and collectively donate another S$200 to me.

"I'm very grateful to them."

In response to media queries, a spokesman for Scoot said that the incident had arisen from the onset of Typhoon Nesat, and flight TR166 to Shenyang had departed at 5.48am.

Due to a smaller aircraft used for the replacement flight, only a smaller number of passengers could be accommodated.

The affected passengers were informed by SMS messages.

Scoot apologised for the inconvenience caused and offered the affected passengers a substitute flight as well as accommodation arrangements.