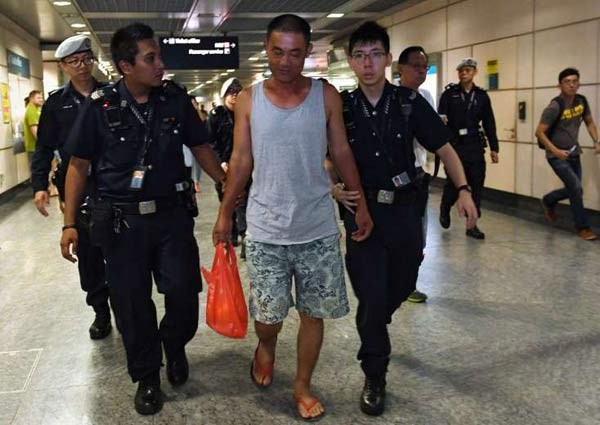 The man being led away by the police into the staff area at Hougang MRT station.
The Straits Times

SINGAPORE - Police have arrested a 39-year-old man for leaving a bag unattended at Hougang MRT station, causing the station to be briefly shut down on Sunday (April 2).

The police issued a statement later at night: "The police have arrested a 39-year-old man for an offence of Public Nuisance under the Penal Code after he had left a bag unattended at Hougang MRT station, triggering a temporary closure of the MRT station. On 2 April 2017 at 2.45pm, the Police were alerted to a case of an unattended bag at the train platform of Hougang MRT station.

"The bag was later established to contain only household items.

"Officers from the Ang Mo Kio Police Division and Public Transport Security Command, with the assistance of SBS Transit, quickly traced the owner of the bag and he was arrested at Hougang MRT at about 4.35pm.

"Preliminary investigations revealed that the man had intentionally left his bag inside Hougang MRT station while he ran an errand. Police investigations are still ongoing."

The incident first unfolded when a bag was found at about 2.40pm on the boarding platform of the station, SBS Transit said.

All trains on the North-East Line had to skip the Hougang Station due to what was called a "security incident" from about 3pm.

Police later said it was attending to a case of an "unattended bag".

"Members of the public are advised to avoid the area," it added on Facebook.

Commuters were redirected to bus services or other train stations and an elderly woman was injured during this process at about 3.15pm.

The Singapore Civil Defence Force (SCDF) received a call to assist her and send her to Tan Tock Seng Hospital after she suffered a laceration at the back of her head and complained of pain on her right elbow.

Close to 4pm, the Hougang MRT station was completely vacated and shuttered by authorities.

The bag turned out to contain nothing suspicious, police said at about 4pm. The train station re-opened shortly after 4pm.

"For the safety of all passengers, trains were made to bypass Hougang station and police were alerted. At close to 4pm, the bag was opened and its contents found to be non-dangerous. Train service resumed at 4.03pm at Hougang Station," said a spokesman from SBS Transit.

"This is a reminder that beyond the work of transporting people, our public transport workers are important eyes on the ground. As first responders, their alertness and quick response are crucial to ensure the safety of commuters," he wrote on Facebook.

This article was first published on April 2, 2017.
Get a copy of The Straits Times or go to straitstimes.com for more stories.