Two men, aged 50 and 53, were arrested by the police yesterday (Aug 21) for making a nuisance of themselves at a bak kut teh stall along Balestier Rd on Aug 19.

Stomp reported the incident after Stomp contributor Dany alerted us to a video on Balestier Bak Kut Teh (Kian Lian)'s Facebook page of one of the men creating a ruckus.

In the video, he throws a container of chopsticks to the ground before taking a chair and slamming it into a rack of snacks nearby.

He then pushes over a bun steamer causing it to break and scatter across the floor in pieces. 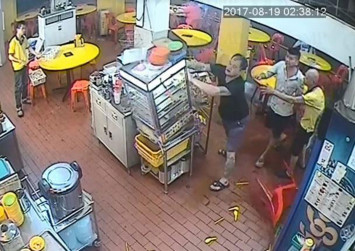 The eatery estimated damages to be worth around $5,000.

According to Shin Min Daily News, one of the men had attempted to converse with a waitress in Hokkien, but the latter could not understand him, causing him to fly into a rage.

The police said in a release that the men were arrested for public nuisance after follow-up investigations by officers from Tanglin Police Division.

The 53-year- old man is also being investigated for a separate offence of rash act.

Anyone convicted for the offence of public nuisance under Section 290 of the Penal Code may be fined up to $1,000.

For the offence of rash act, anyone convicted may be sentenced up to six months in prison or fined up to $2,500 or both.