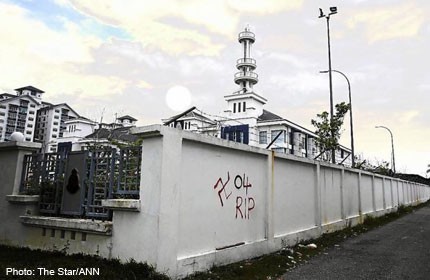 KUALA LUMPUR: Police will not tolerate any group or gang that seek to challenge the authorities.

Inspector-General of Police Tan Sri Khalid Abu Bakar said on Wednesday the police would not allow any criminal to challenge or even make fun of the force.

"No criminal can win against the police.

"We will use the full extent of the law to hunt down and bring all criminals to justice," he told a press conference after presenting certificates of appreciation to 50 good drivers in conjunction with Ops Selamat.

Commenting on acts of vandalism at the Kuala Langat police headquarters, Khalid said police have already identified the culprits.

"We have identified those responsible for the graffiti and we will take action," he said.

Meanwhile in Banting, the police are promising stern action against gang members, in light of a wall at a police headquarters here being defaced with graffiti of Gang 04 symbols. Selangor acting police chief Datuk A Thaiveegan said cops would not be intimidated by such action, in what he labeled as "kurang ajar".

"I don't think that (graffiti) was meant to be a threat. It's just done by sampah masyarakat with no respect for the law.

"If that was a challenge, that's not the way to do it.

Come meet with the OCPD, say 'I'm from 04'. If they are brave, marilah," a riled Thaiveegan said in a press conference Wednesday.

Besides the Kuala Langat police headquarters, the 04 number, religious Swastika symbol and R.I.P (rest in peace) were found sprayed on 11 other locations in Banting including a police post and a bank here.

This comes after five people, believed to be members of Gang 04 were gunned down in Penang on Monday.

The incident has led to an outcry from parents and friends of the supposed gang members, and even some politicians who alleged that the police acted "overzealously" during the shootout.

"If I had a friend who I know was not doing right, I would try to help him or make a report. Some parents don't even know what their kids are doing.

"They don't come forward and give cooperation. But when a confrontation with the police happens, everyone shouts and create problems.

"This last month people have been complaining about shootings asking what are the police doing. So when we take action against those suspected, people should give the police their support.

"We are doing this to protect the community," he said.