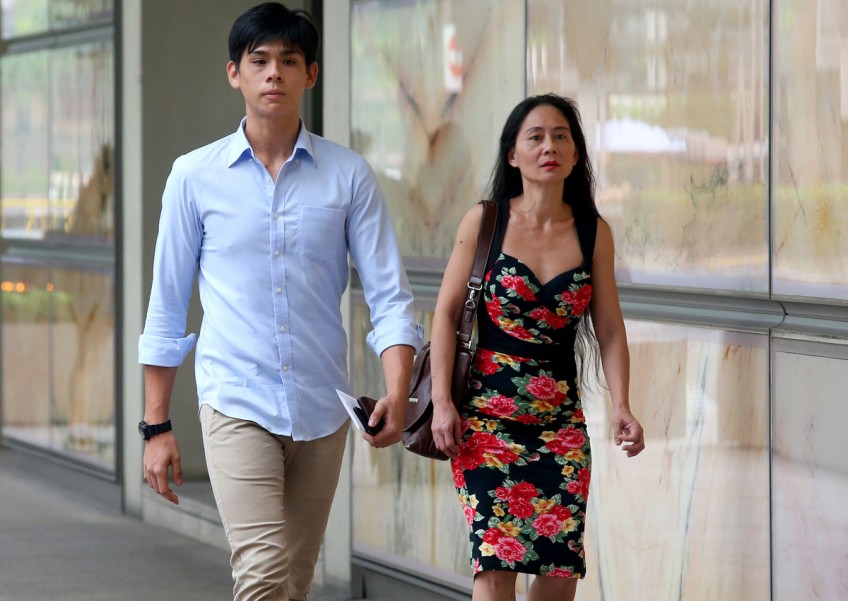 Prison made me feel useless and drove me to turn my life around, said a youth who was convicted of criminal intimidation and contempt of court.

Pierre Chng Yuheng, 20, apologised in the High Court yesterday for his behaviour that had got him in trouble.

He was convicted of two criminal intimidation charges in March and fined $4,500. He was also jailed for a week for contempt of court. The prosecution later appealed for the sentence to be enhanced.

But after Chng apologised at the High Court yesterday, the prosecution withdrew the appeal.

"The Attorney-General's Chambers (AGC) had taken into consideration, among other things, the convicted person's remorse and contrition for his offences - including the contempt matter - in its decision to withdraw the appeal," said an AGC spokesman.

Dressed in a long-sleeved shirt, Chng cut a different figure from the full-time national serviceman who had aggressively confronted his former landlord in May 2013.

He had also arrogantly conducted his own defence in the State Courts in February.

Yesterday, he apologised to the judiciary and thanked Deputy Public Prosecutor (DPP) Anandan Bala for withdrawing the prosecution's appeal.

"I could now sense sympathy that tempers justice with mercy," he said, reading from a handwritten letter.

He also said that prison time has changed him: "Sitting inside with nothing to do but eat or sleep, there was a lot of thinking to be done and I realised how useless I am."

He admitted that his immature actions when he was 17 had caused his mother, Ms Chng Leng Khim, much distress, pushing her further into depression.

Ms Chng had borrowed money from a relative to pay her son's fine.

Promising to continue his studies, Chng said he would not get into trouble with the law again.

Justice Chan Seng Onn, who was presiding over the appeal, said: "I'm glad you realise your mistake and made a firm decision to change for the better. I understand why the DPP has withdrawn the appeal."

Speaking to reporters later, Chng said he had been ostracised in the 2.5 years during the case.

"I have seen the comments on Facebook, on the pages of The Straits Times and The New Paper. I don't want to comment on those but I just want to say I'm finally happy."

He added that he was happy to put this saga behind him and that he did not expect a jail term after the trial in the State Courts.

Asked how his mother has been coping, Chng said: "My mother is a wreck after this entire saga. She is not being treated (for her depression) and her condition has worsened."

Ms Chng accompanied her son to court and waited patiently as he spoke to reporters.

Chng added that he and his younger brother are trying to give their mother as much support as possible.

Their sister, Carmen, who kicked a police officer during the same confrontation, was given 18 months' probation and is living in a girls' home.

When Chng completes his national service in six weeks, he intends to work part-time to provide for his family.

Chng, who dropped out of school after Secondary 1, said: "We have never had a permanent shelter and got into trouble because of this.

"I will continue my studies but studying comes after stability. One can't study without peace of mind."