Prized bird theft ring in Malaysia on the prowl 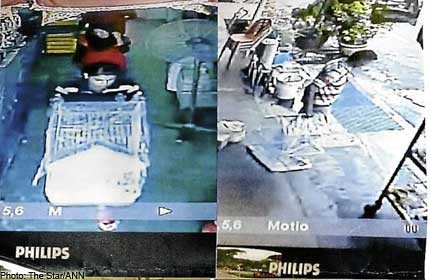 Recordings showing how a group of tricksters managed to steal a pair of cockatiels from a pet shop in Taman Johor Jaya.

JOHOR BARU - A syndicate stealing highly-prized birds is on the prowl in Johor after two incidents were reported just three days apart.

Last Friday, Pulai Springs Resort reported that thieves had prised open its aviary and removed a pair of macaws named Mork and Mindy, as well as Penny the peacock.

On Sunday, a group of tricksters conned a pet shop in Taman Johor Jaya here into parting with a pair of cockatiels.

According to Pulai Springs' senior landscape superintendent Tey Chuan You, the thieves were familiar with the pet trade as they only stole the expensive birds.

Meanwhile, pet shop owner Wong Ruen Tiam, 47, said two men and a woman walked into his shop at 4.30pm on Sunday and showed "great eagerness" in buying a pair of cockatiels.

"A staff, who was assisting them, helped them to load the cage and a bag of bird food into their car, without asking them to pay first," he said.

"He did not suspect anything amiss until the trio quickly hopped into the car and took off," he said, adding that he had incurred RM1,600 in losses.

Wong added that cockatiels, usually found in Australia, were among the popular breeds as they were "usually friendly and could be trained to talk".

"A similar incident took place just a few weeks ago at another pet shop in Permas Jaya, but the syndicate did not manage to get any birds," he said.

Pulai Springs has put up a Facebook posting with photographs appealing for the birds to be returned safely - with the promise of a reward.

Police urged those with information to contact the Johor police hotline at 07-2212 999 or the nearest police station.