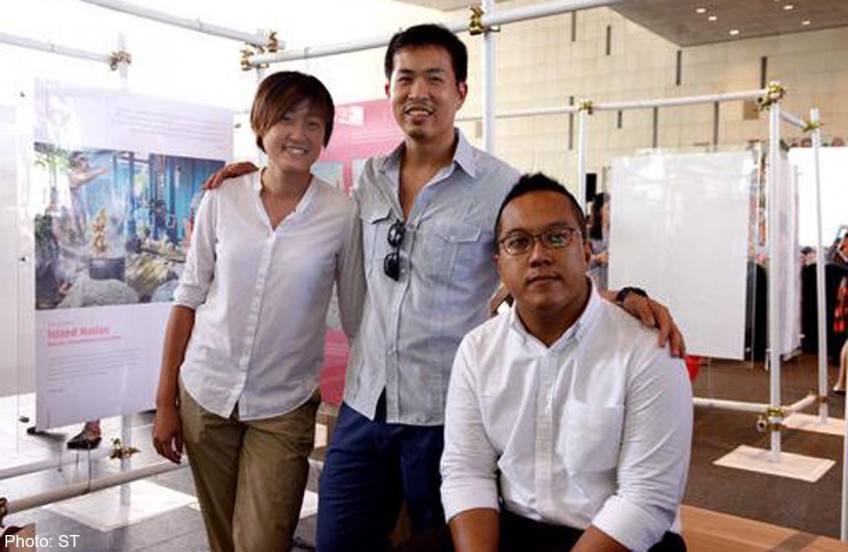 Photographers (from left) Juliana Tan, Edwin Koo and Zakaria Zainal's Island Nation is one of 74 irememberSG fund projects that will go on show from next month till August as part of the NLB Singapore Memory Project's Past Forward event.

Late last year, 80 former island-dwellers returned to their home on St John's Island for their first reunion in four decades.

They spent a day swimming in its familiar waters and tracing the winding paths they once took to get to school. Many took their grandchildren along to give them a glimpse of kampung life, pointing out familiar sites along the way.

The islanders were reunited on the initiative of photographers Edwin Koo, 36, Zakaria Zainal, 30, and Juliana Tan, 25, for their project Island Nation, which documents life on 12 of Singapore's Southern Islands.

It took them almost four months to piece together the name list of St John's Island residents who now live on mainland Singapore.

Mr Koo said they had set out to "capture a part of history not recorded in textbooks and to reunite forgotten communities". The end result will be a multimedia website.

Their work is one of 74 irememberSG fund projects that will go on show from next month till August as part of the National Library Board (NLB) Singapore Memory Project's Past Forward event, launched yesterday by Minister for Communications and Information Yaacob Ibrahim.

The fund offers each project up to $50,000 and projects can take the form of short films, photo exhibitions, publications, websites, digital games and animation. A preview of 20 projects, including Island Nation, is on at the National Library's plaza in Victoria Street until tomorrow.

NLB chief executive Elaine Ng said Past Forward showcases the curated stories of the man in the street.

"We hope the memory movement that the Singapore Memory Project helped to generate will inspire more Singaporeans to capture memories for posterity," she said.

Dr Yaacob said: "This year, as our nation celebrates SG50, it is timely to reflect on our past, appreciate the progress we have made, and look forward to the future with confidence."

Another project on show involves Singapore icons made of Lego bricks, including the Merlion, a conserved shophouse and a double- decker bus.

Dr Yaacob said his ministry, together with its statutory boards, has planned a series of events to mark Singapore's jubilee year. These include the Singapore Memory Project's film festival in May, screening of films from the 1940s to 1960s at the newly restored Capitol Theatre by the Media Development Authority in August, and the Infocomm Development Authority's festival of technology the following month.

This article was first published on Mar 19, 2015.
Get a copy of The Straits Times or go to straitstimes.com for more stories.