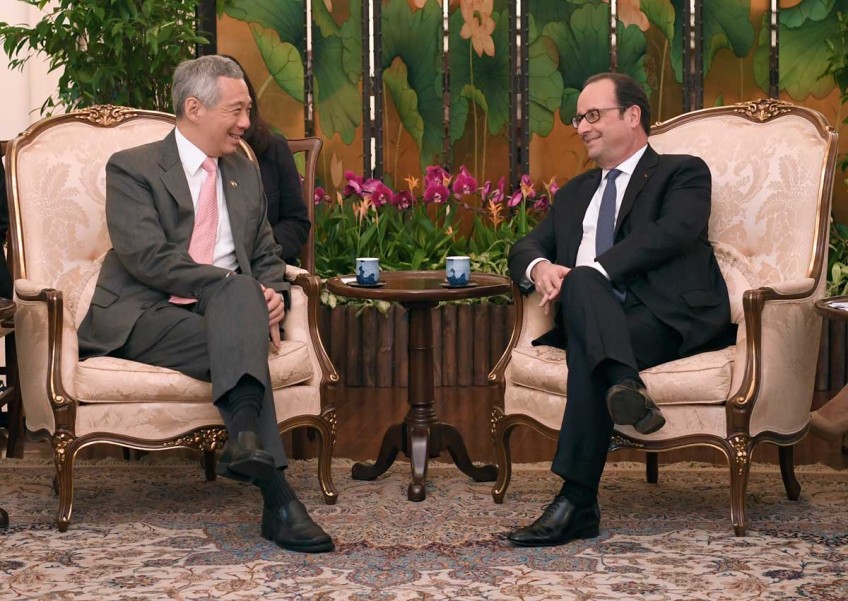 Mr Hollande calling on PM Lee at the Istana yesterday, the second and final day of his state visit here. The French President said leaders must show that the only solution for a fairer world is multilateralism, compliance with international law, respect for independence and openness, adding that France shares these principles with Singapore.
The Straits Times

Big democracies and even entire continents may face the temptation of looking inward, but this so-called solution leads to a dead end, visiting French President Francois Hollande said yesterday.

He urged world leaders to resist protectionism amid an uncertain world, and to show people who fear globalisation that the best way forward is still an international order based on rules.

Delivering a lecture on the second and final day of his state visit to Singapore, Mr Hollande defended the international system of rules and co-operation created after World War II. It has prevented further conflict and brought about prosperity, he argued.

However, this global order is now being threatened by those who do not want to open their economy, he said in French in his 30-minute lecture titled "France and Singapore, Strategic Partners in a Fast-changing World".

Voters will have the final say in this clash of visions, said the outgoing French President, who will not seek re-election when his term ends in May.

Far-right French presidential candidate Marine Le Pen, considered one of the front runners to succeed Mr Hollande, is campaigning on an anti-immigrant and anti-European Union platform.

In an uncertain global climate, populists can tap into legitimate fears that people might feel, and "be tempted to impose solutions that might be contrary to the interests of our country", Mr Hollande said.

But leaders must explain the consequences of such inward-looking actions, he told about 1,000 officials, academics and students at the Singapore Lecture organised by the ISEAS - Yusof Ishak Institute.

He said: "We must explain what the closing down of borders is all about. What the building of a wall means. What unfair and inappropriate trade policies might mean, because it will target nationals of only one country, for instance."

While he did not provide names, it was a clear reference to the anti-immigration platform adopted by supporters of Britain's withdrawal from the European Union, and to American President Donald Trump, who wants a wall along the United States-Mexico border.

He acknowledged that sections of the public have understandable fears about globalisation.

He made the case for "regulated globalisation" based on the sovereignty of nations but with a place for international organisations, particularly the United Nations.

"Those who attack the UN are diminishing the ability of world governance to find solutions for conflicts," he said.

"They cannot be strengthening their own nations to the detriment of the system of international regulation."

He said that it is also very easy for populists to tell the public that imposing duties and taxes on foreign goods and services will protect jobs, but such policies will harm countries because it strikes at the heart of what enabled world growth for the past 60 years - the refusal of protectionism.

If goods and services cannot be freely exchanged, and technology and knowledge freely moved between countries, this could mean fewer jobs overall, he added.

This is why leaders must show that the only solution for a fairer world is multilateralism, compliance with international law, respect for independence and openness, said Mr Hollande.

"We are not powerless and indifferent. We can act, and it is up to states to do so," he said.

France shares these principles with Singapore, said Mr Hollande, who concluded by stating that France wants to retain its presence in Asia.

This prompted Deputy Prime Minister Tharman Shanmugaratnam, who moderated the session, to thank him for his "clear and forthright statement of support for a rules-based order".

Earlier in the day, Mr Hollande met Prime Minister Lee Hsien Loong, who hosted a lunch for him.

He also spoke at the France-Singapore Innovation Forum and had an orchid named after him. The Dendrobium Francois Hollande, a hybrid species, has light chestnut-brown petals.

Mr Hollande departed for Malaysia last night, and will visit Indonesia next on what is likely his last foreign tour as president.