PSLE scores to use wide bands for grades like O' levels 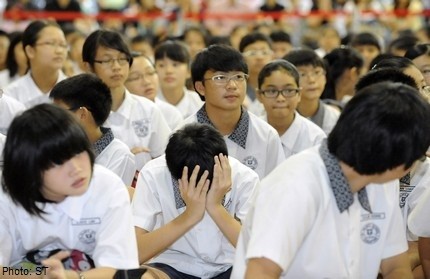 The changes to PSLE scoring, though, will only kick in a few years time.

The PSLE T-score, long a source of stress for students and parents, will eventually be removed and replaced with bands similar to those used for O' and A' levels, said Prime Minister Lee Hsien Loong on Sunday.

He said the move was to the remove the fine distinctions in the T-score and ease excessive competition to chase every point: "If you get an A*, that's an A*. It doesn't matter whether it's a 91-mark A* or a 99- mark A*."

The move would not take place immediately, however. He said it would take several years to do.

Calling the PSLE one of the most important examinations, he said that many believe it "determines the student's future", and felt tremendous stress. Doing away with the T-score would help to lessen this pressure, said Mr Lee who added that he does not know his own PSLE score.

When he took the exams in 1963, the scores were kept confidential, he said, and students were only told whether they had passed or failed and which school they were posted to. "Luckily I passed," he quipped.

The changes to PSLE scoring, though, will only kick in a few years time.

Another change Mr Lee announced will let all secondary one students take a subject at a higher level. But this is provided they have done well in it in the PSLE.

Currently, only students in upper secondary levels are allowed to do so.

This will provide more flexibility in tailoring their education to their abilities and development, he said.