Pulau Ubin offers a taste of kampong life in Singapore

In Singapore, 15 minutes is all that's needed to travel back in time 50 years. That's how long it takes a bumboat to sail from the Changi Point Ferry Terminal to Pulau Ubin, a 10 sq km (4 square mile) island that's rooted in the 1960s, the era of indepen­dence. Ubin is wildly different from Singapore Island, with untamed jungle, roaming animals, hilly meadows, glassy lakes and squat, tin-roofed homes without running water or electricity but sugared by the sweet sound of silence.

According to legend, Ubin was formed when an elephant, a pig and a frog attempted to cross the waters to Johor, in modern-day Malaysia, and failed, turning into stone. The elephant and pig became Pulau Ubin, the frog giving its name to Pulau Sekudu ("frog island"), an islet at its southeast end.

From the 1800s, Ubin was home to a thriving granite-mining industry - Pulau Ubin means "granite island" in Malay - and thousands of people, mostly Chinese, lived and worked here. The last quarry closed in 1999 and soon nature began to wrest back control. Houses were abandoned and the quarries filled with rainwater, transforming into still, eerie pools. Only a handful of residents remain, about 25 by some estimates and mostly elderly, eking out a life defined by simplicity.

Singaporeans come to Ubin - more than 2,000 of them on weekends - to escape the towers and traffic of the city, enjoy nature and gain an understanding of just how far this nation has come since independence, in 1965, when many people lived in a kampong (village) set-up similar to those found on Ubin. 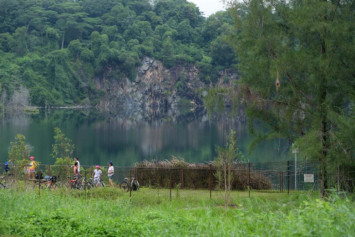 On weekends, the roads fill with cyclists, and the lotus ponds and viewpoints swell with visitors scoping out the best vantage for an Instagram shot. On weekdays, though, the island radiates a fittingly languid ambience and you'll encounter only a few day-trip tourists or school groups on camping expeditions.

From the main village, in Ubin's south, the only part of the island with electricity and where the bumboats dock, the roads diverge in several directions. The village is populated with bicycle-rental outfits, a few small shops, basic restaur­ants and the Fo Shan Ting Da Bo Gong Temple. The Chinese shrine is being rebuilt in preparation for a grand 150th-year celebration, on May 15, which will be, according to temple committee secretary Doreen Lim, "the biggest event that the island has ever seen".

There's not much to keep visitors in the village, though it's worth stopping by the National Parks Board office to collect a map.

Open that map and you'll find Ubin's shape resembles a moth, the points of interest being on the "wings". Heading east, I cycle past a giant lotus pond near a sign marking a "sensory trail", lined with papaya, rambutan and banana trees. I continue on to the Former Head Man's House, one of the most intact homes on the island, the residence of the village head in the days when such roles held meaning.

Outside the two-storey, light-blue clapboard house, clothes dry in the sun, framed Chinese scrolls hang on the walls and bright pink bougainvillea glow in the morning rays. An old woman sweeps the ground by the front door.

Past the house is the Ubin Fruit Orchard, a venture that was established in 2016 to showcase the fruit trees found in the island's villages. Marang, pulasan, binjai, tampoi and sentul are among the lesser known. Beyond, lined with tall trees offering plenty of shade, the empty paved road rises and falls, twisting left and right, taking me past a towering pulai tree in a Muslim cemetery, the carved tops of gravestones poking out of the ground.

I stop to take a photo of a family of macaques seated on a branch and a fearless male approaches, baring his teeth, hissing with violent intent.

The road eventually arrives at the Chek Jawa Wetlands. If there's one destination that visitors to Ubin come to see, it's this carefully maintained intertidal wetland. And yet it almost didn't exist, earmarked for land reclamation in the late 1990s before being recast as a natural delight for all to enjoy. The visitor centre is in a restored Tudor cottage, built in the 1930s as a weekend retreat for Singapore's chief surveyor, Landon Williams.

The breezy coastal walk along Chek Jawa's boardwalks, with Pulau Sekudu visible to the south, passes a seagrass lagoon, rocky shore and coral rubble, where flatworms, anemones, pistol shrimps and fiddler crabs busy them­selves with their daily routine. In the coastal forest, plants no longer common elsewhere in Singapore flourish, and fauna such as the wild pig and red jungle fowl roam.

In the distance can be seen Singapore proper, with its tower blocks, cranes, and air-traffic control tower, and from above comes the roar of planes that have just left Changi airport, but still, all that civilisation feels light years away.

The mangrove walk leads inland, above mounds of excavated earth - the handiwork of the mud lobster - and thickets in which oriental pied hornbills and white-bellied sea eagles loiter. The Jejawi Tower is a 20-metre-tall observation structure named for a local banyan tree. The top deck is above the canopy, offering a wraparound panorama of treetops briefly interrupted on one side by the sea, and not even a group of teenage boys playing Eminem on a phone at full volume can shake the sense of tranquillity.

To the north of the wetlands, I find an unpaved track through the forest, heading to no obvious destination. I bump along the rocky, stone forest floor (granite, of course), the trail sometimes obscured by a blanket of leaves, with nobody about, feeling lost, far from people and buildings, commerce and conflict. The only sounds are those of trees rustling in the wind and crashes and crunches in the forest; wild pig? Monitor lizard? Troupe of macaques?

In the centre of the island is Ubin's most hypnotic spot. From Puaka Hill it's possible to look down onto an old quarry from two viewing spots; steep, hewn cliffs plummeting to sapphire waters surrounded by jade forest, looking like some mysterious portal to another realm.

The only other world that awaits me, however, as I leave the island of the elephant and the pig, is the sparkling, man-made modernity of the Lion City.