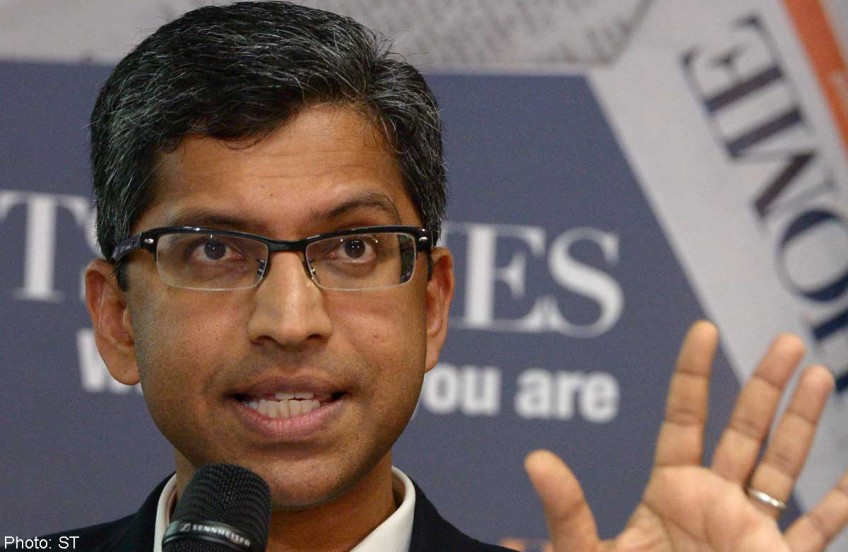 Peoples Action Party MP of Bishan-Toa Payoh GRC Hri Kumar Nair speaking at the Q and A session at the SPH News Centre on 23 April 2014.

SINGAPORE - PAP MP Hri Kumar Nair has become the first person from the ruling party to speak out against the National Library Board's (NLB's) decision to pulp three children's books that were deemed "not pro-family".

In a Facebook post titled "Pulp Friction", Mr Nair said yesterday: "I do not believe homosexuality falls in the category of issues which should be excluded. In fact, neither does the NLB. It says it carries such books in the Adult section."

His comments came as the friction on the issue became more intense. Three judges resigned from the Singapore Literature Prize (SLP) yesterday to protest against NLB's decision.

SLP is the largest local award for writing in four languages. The judges, T. Sasitharan, Romen Bose and Robin Hemley, issued a joint statement in which they said: "We condemn in the strongest terms NLB's decision to remove and destroy these books, given that it is responsible for the dissemination of information rather than its destruction. The fact that the board has not even considered restricting access to the publications but has moved directly to pulping them is very disconcerting."

Mr Nair's objection took a slightly different tack. He agreed that NLB was within its rights to remove books that encourage criminal acts or propagate racist doctrines. But, to him, the issue was whether homosexuality fell within that category.

His answer was that it did not.

Mr Nair felt that children should read books with controversial themes under their parents' supervision. "And if parents prefer to keep such books away from their children or to tell their children that such books are 'wrong', so be it," he wrote.

He felt the solution could be to have the books placed in a separate section, which children could access only with an adult present.

"Excluding such books or, worse, destroying them, sends an altogether different and confusing message about the role of the NLB," he wrote.

"The NLB obviously has some work to do to repair its image, and make clear its mission. I hope it will not run away from this," he added.

The "message" from this episode also bothered the three judges who resigned from SLP.

They said they could not continue as judges, given the close links and associations that exist between NLB and the National Book Development Council of Singapore (NBDCS), which is behind SLP.

Professor Hemley told My Paper: "This was a difficult decision. The three judges discussed it at length for several days before reaching consensus, though the three of us were appalled from the outset by the actions of the NLB.

"We were mainly trying to ascertain the degree of NLB involvement with the (NBDCS), and we came to the conclusion that the affiliation between the two organisations was too close for comfort."

The NBDCS said it regretted the judges' decision and would try to find replacements for the them.

It also clarified its relationship with the NLB. "Neither organisation is involved in the day-to-day decision making of the other," it said.