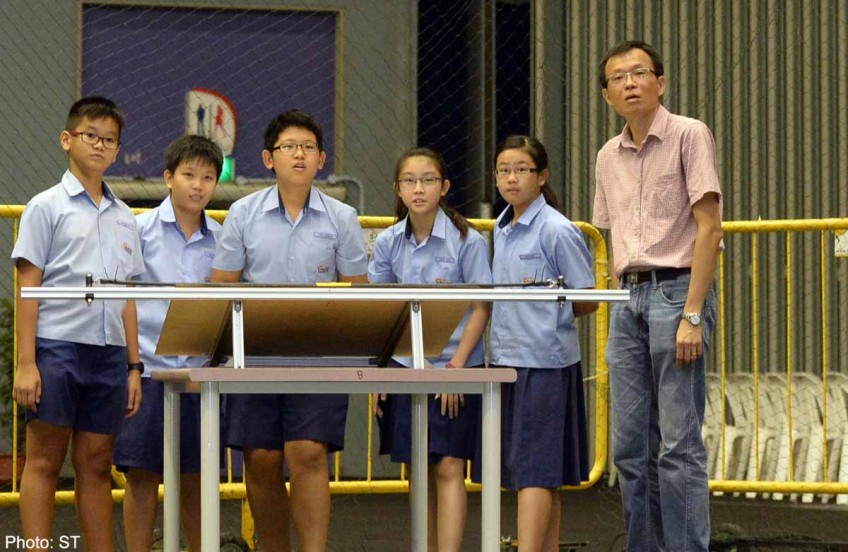 Five pupils from Jurong Primary School were the unlikely winners of a flying machine competition yesterday, as they were taking part in a category meant for secondary school students.

The mission was to design and build a small unpowered glider and fly it into scoring zones.

The annual contest was organised by research institution DSO National Laboratories and Science Centre Singapore and held at the latter.

Typically, primary schools compete in another category that involves folding paper planes to achieve the longest, farthest or most accurate flight.

The team of Primary 5 pupils, who had named themselves JPS Falcon, instead faced 93 competitors, including those from NUS High School of Mathematics and Science, Hwa Chong Institution and Dunman High School.

Pupil Yang Zuo Quan was responsible for launching the team's unpowered glider - made from balsa wood - from a catapult. "I was very nervous. We were competing against top secondary schools and their gliders looked awesome," he said.

JPS Falcon tied with students from the Singapore Youth Flying Club. In the tiebreaker, the primary school team scored the full 80 points, while the other team managed 40 points.

Jurong Primary science teacher Low Heng Chong said he taught the pupils simple aerodynamics and encouraged them to read up on their own. He was given a special recognition award for his efforts. His team won a cash prize of $500 and each member was given a game console.