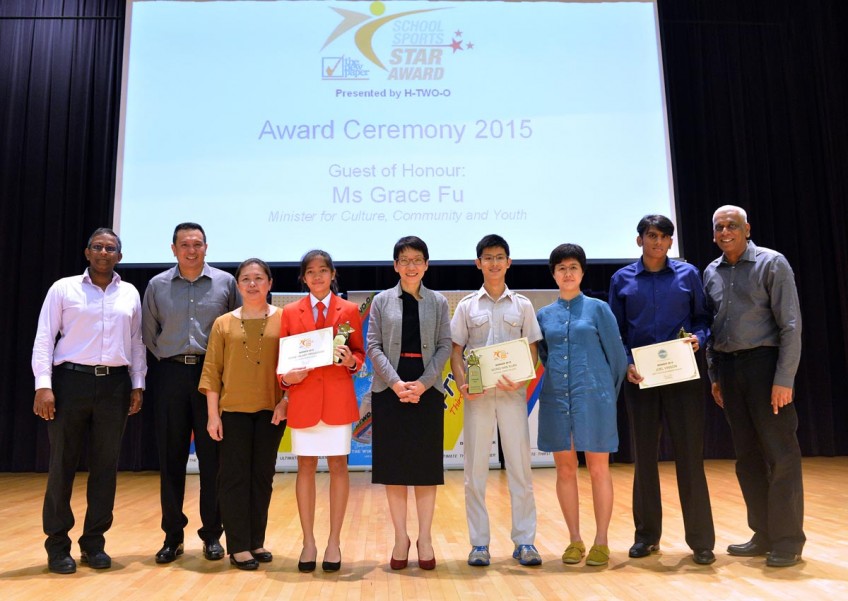 The elite youth sports system in Singapore is set to be approached and built with greater focus and precision, following the recommendations of a review committee that examined the Singapore Sports School's (SSP) role in the youth sports excellence landscape.

A slew of new initiatives will be rolled out to give high-performing student-athletes here a boost. They include, notably, the creation of a National Youth Sports Institute (NYSI), which will serve both the SSP and mainstream schools.

Existing programmes within the SSP will also be fine-tuned while new ones are introduced.

Minister for Culture, Community and Youth Grace Fu unveiled the recommendations yesterday at the The New Paper School Sports Star Award, optimistic that the new measures will help raise the level of youth sporting excellence here.

She said: "These measures signify a broader commitment to provide continued support for youth sports. Our goal does not stop at nurturing champions; we aim to develop the youth athletes of today into sporting heroes of tomorrow."

Co-chaired by MCCY permanent secretary Yeoh Chee Yan and Sport Singapore chairman Richard Seow, the committee spent a year consulting about 200 stakeholders both within and outside the SSP's Woodlands campus.

The review was a result of Prime Minister Lee Hsien Loong's challenge to the SSP at its 10th anniversary celebrations last year to "become a national sports academy of excellence" in its next decade.

The SSP's answer to this call, said its principal Tan Teck Hock, was to be knowledge-sharers and collaborators, working in partnership with the NYSI.

Headed by Tan Wearn Haw, a former national sailor and chief executive officer of SingaporeSailing, the NYSI will form a bridge between the high-performing student-athletes and the Singapore Sports Institute (SSI).

While the NYSI will largely mirror SSI in providing resources like sports science and medicine, it differs in that it specialises in and tailors its services to the unique needs of athletes around the ages of 12-18.

It will initially be staffed by about 26 people, mainly SSP's sports scientists, psychologists, physiotherapists and athlete life management officers before scaling up to a strength of about 50 over the next few years.

Added Ms Fu: "Over the last 10 years, (the SSP) has accumulated valuable experience and expertise.

"It is now in a good position to share its expertise more widely to support the sporting aspirations of student-athletes in mainstream schools and make a greater impact in youth sport."

The review has allowed the SSP to realise that the school has an important role to play in helping to develop youth sporting excellence here, said SSP principal Tan.

In an interview with The Straits Times, he said that the hope is as much to take SSP to another level as it is to contribute to the development of those who do not attend the school.

He said: "Is this a review just of the SSP, or of how it plugs into the youth athlete development system in Singapore? There's still a segment of people out there who see the SSP as a rival. This us versus them thing is not very healthy.

"We ought to have a more expansive mindset. We only have this much talent in Singapore and I think we should do everything possible to nurture them."

Among the NYSI's responsibilities are talent identification and setting up a youth coaching division.

There are also plans to develop a youth carding system from 2017, which will give the athletes access to NYSI resources based on the level at which they are registered.

The institute will seek to fill the gaps in the system in tending to the youth, said NYSI director Tan.

"You want to see quality and quantity of athletes when we feed them into the SSI system further down the pipeline," he said.

"The NYSI is here to help level up the whole playing field.

"At the end of the day, Singapore has to benefit and it will."

"It's a pretty good move to extend help to the base, because right now there's a lot of assistance given to Sports School and national team, but other than that, it's mainly us footing our own costs for equipment and training," said Kevin Ong, 17.

"This will be quite a good way of extending outreach to athletes that really need the development," added the swimmer from Anglo-Chinese School (Independent).