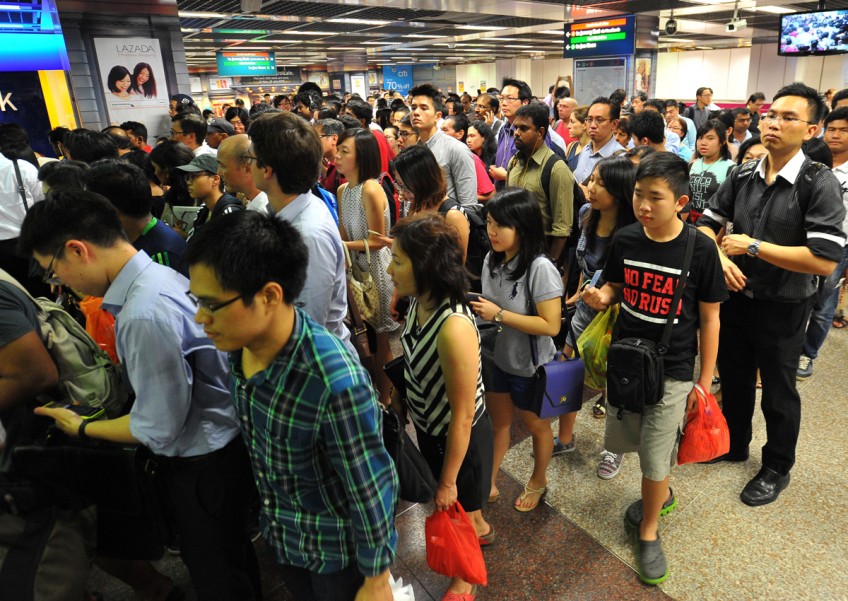 The crowd at City Hall MRT station during the MRT service disruption on July 7, 2015.
The Straits Times

No recovery plan, however comprehensive, can adequately deal with the chaos that immediately follows a very severe train disruption - the only solution is preventing such disruptions in the first place.

Having said that, service staff in train stations could be roped in to help deal with the fall-out in the critical first hour of less severe incidents, wrote Transport Minister Khaw Boon Wan yesterday in his blog. "Even if it is simply to help guide the commuters to the right bus stop or to the right queue, it will be a great help to reduce confusion amongst commuters," he wrote.

His comments come in the wake of an unprecedented rail failure on July 7 that crippled the North-South and East-West lines, affecting more than 400,000 passengers. Operator SMRT was fined a record $5.4 million for the incident, which arose because of inadequate maintenance.

Since December 2011, there have been at least 35 and 22 major disruptions on the MRT and LRT networks, respectively.

Mr Khaw pointed out that no amount of service recovery could deal with a disruption on the scale of the July incident - so prevention is the only way. "Assuming train intervals of 2.5 minutes, we will need at least 24 double-decker buses every five minutes," he wrote.

But he added that "less severe" disruptions would continue to happen in future, and while contingency plans would be put in place, "mobilised resources" would need time to get to the affected stations.

Citing the recent crash-landing emergency exercise at Changi Airport, Mr Khaw said he observed how various stakeholders at the airport worked together as one family.

"This is the kampung spirit that we must inculcate in every MRT station," said Mr Khaw, adding that Senior Minister of State for Transport Josephine Teo had suggested involving shopkeepers working in the station, so they can play a part in contingency plans.

"Such 'family-ness' will be important not just when there is a technical breakdown, but (will be) even more critical if there is a terrorist- led sabotage to our rail system," he said. He added that he has asked the Land Transport Authority and transport operators to consider the suggestion.

Mrs Teo told The Sunday Times that she had observed many commuters shopping at shops near the stations before their bus and train journeys. "It's quite natural for them to interact with service staff. If these service staff also know what local measures are being taken, they can help advise the commuters, who can in turn advise other commuters," she said.

Ms Karen Tan, 30, who works at a nail parlour at Tampines MRT station, does not mind getting involved. She said she was herself affected by a train disruption earlier this year and had to figure out how to get home on her own.

"If we can all help each other, that would be so much better," she said.