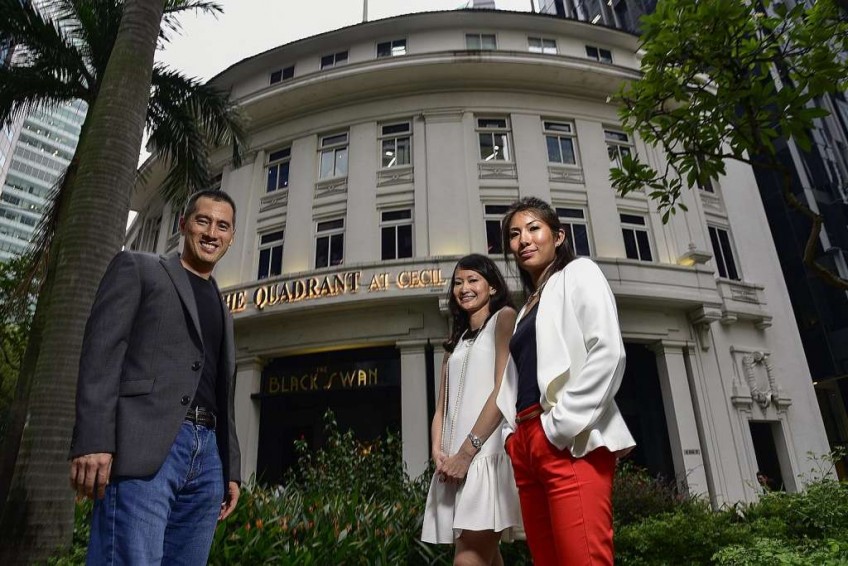 Most building conservation efforts in Singapore are led by the Urban Redevelopment Authority (URA), which decides what to add to the country's stable of 7,000-plus protected structures.

In a rare case, a group of heritage enthusiasts, including executives from a property company, banded together to have the building they rent - The Quadrant in Cecil Street - gazetted for conservation by the URA.

About $1 million of the company's money was spent restoring it. It started off as just another project for Homestead Group chief executive Low Jeng-tek, portfolio asset director Sue Ann Lim and design lead Sue Lynn Oliveiro, whose company specialises in refurbishing heritage properties for new uses.

As master tenants, they were sprucing up the dilapidated building in the Central Business District and turning it into a tech office complex after taking over from a childcare operator in 2012. They had signed a nine-year lease with the Singapore Land Authority (SLA).

Read also: Homeowner forced to move out after tenants skip rent for 3 years and refuse to leave Hougang flat

They soon began uncovering stories about the 1930s low-rise landmark's history and architectural merits, prompting them to question why it had yet to be protected.

The letter by Mr Lee, 49, the vice-president and Asia-Pacific general counsel of an American healthcare company, described The Quadrant as an "art deco structure which sits at the gateway to Raffles Place and Marina Bay", and a "lone relic" of pre-WWll Singapore in an area dominated by skyscrapers.

The Homestead executives had shared their findings with him:

•The Quadrant had served as the South-east Asian headquarters of the Kwangtung Provincial Bank, which was used by immigrant Chinese to remit money, and its original banking hall layout and bank vault were still intact.

•It was set up by finance minister T.V. Soong of the Republic of China, brother-in-law of Chinese revolutionary Sun Yat Sen.

Their year-long restoration also brought back to life its original iron-gate traction lift - one of the few remaining in Singapore.

Mr Low told The Straits Times: "Our lease expires in 2021. Our worry is that the historical and architecturally unique building could one day be torn down and replaced by a skyscraper, given the value of land in the district.

"While we are still the stewards of this property, while it is still in our care, we must do something to ensure it stays beyond this date."

A Facebook group, Conserve The Quadrant, has been set up.

Most ground-up efforts to conserve buildings are usually led by owners of private buildings under the URA's voluntary conservation scheme. A URA spokesman said there have been "a handful" of such cases over the last decade, including the Parochial House at St Joseph's Church in Victoria Street.

Independent conservation bids by non-owners are even rarer.

Experts whom the group contacted, including cultural geographer Lily Kong, expressed surprise that The Quadrant had yet to receive conservation status.

A possible reason is that a road reserve line runs across the building.

Professor Kong said the private sector stepping forward to propose its conservation would belie a nation coming of age "in which our values include pride in our history and heritage". She said: "As Singapore matures, it would be great not to rely only or largely on the Government for conservation. There is certainly a prima facie case for this building to undergo assessment."

The URA said it welcomes the suggestion, adding however that as there are no immediate plans for the site, "the merits of conserving the building will be studied as part of the larger plans for the area".

As custodian of state properties, SLA has been opening up places with "heritage value and historical charm" to optimise their use, said chief executive Tan Boon Khai.

He added: "Conserving The Quadrant will educate the public about our yesterdays, and also connect us to an innovative new tomorrow."

This article was first published on Mar 23, 2017.
Get a copy of The Straits Times or go to straitstimes.com for more stories.