'Reach out beyond main races here' 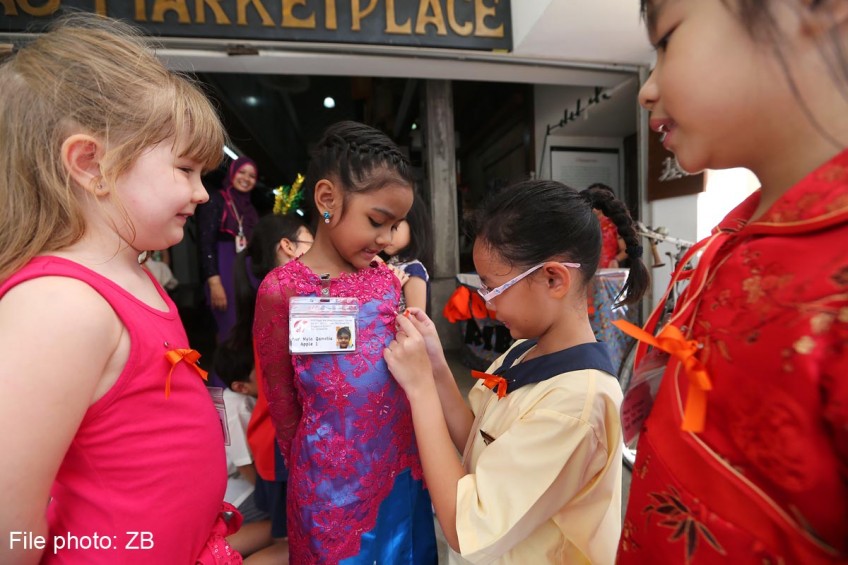 A pupil from Elias Park Primary School pinning an orange ribbon onto the outfit of a kindergarten pupil. More than 39,000 Primary 4 pupils celebrated Racial Harmony Day by making orange ribbons.

SINGAPOREANS have to go beyond understanding the main races here, to respect everyone who lives and works here, regardless of their race, language, or religion, Education Minister Heng Swee Keat said on Racial Harmony Day yesterday.

"As Singapore moves towards a more diverse landscape, it is important that we continue to embrace diversity. Let us all do our part to understand other cultures, and going beyond that, let us also be advocates of racial harmony," he added.

He urged pupils to befriend those of other cultures, races and religions, and to encourage their friends to do the same.

They, too, participated in Racial Harmony Day activities at various schools.

Since the 1990s, many countries have adopted the orange ribbon as a symbol of harmony, equality and freedom. In Singapore, Onepeople.sg, a national body focused on building racial and religious harmony, uses it to symbolise racial harmony.

Primary 4 pupils in all 190 primary schools were each given a kit containing materials to make six ribbons.

Each wore one on the uniform, and gave the rest to friends from other cultures, with an accompanying note encouraging them to find out more about other cultures and practices.

The Primary 4 pupils at Elias Park Primary School even hosted about 60 children from two neighbouring PAP Community Foundation kindergartens, giving them orange ribbons and exchanging stories about their cultures.

One of them, Kevin Yong, 10, said: "I also taught the kindergarten children how to play traditional games such as capteh and "five stones". I told them that we shouldn't say impolite things to people from other cultures. We should try and appreciate their cultures and understand them."

Aayan Vatsa, also 10, who exchanged orange ribbons with his friends, said: "I received a card with a message on Chinese New Year. I know they use red packets with money, called hongbao."

At Fuhua Primary School, Ms Grace Fu, Minister in the Prime Minister's Office and Second Minister for the Environment and Water Resources and Foreign Affairs, launched a roving exhibition tracing the history of Singapore's grassroots movement. It will go to schools, public libraries and community clubs, to create more awareness of grassroots leaders' work and the importance of social cohesion.

Ms Fu, who also chairs the National Community Leadership Institute, also launched its Youth Leadership Programme yesterday. The programme, made up of 11 schemes ranging from half-day sessions to three-day camps, aims to reach out to youth to inspire them to serve the community, and stand up for issues they care passionately about.

"There are people in the world fighting one another over race, over religion. So we must protect this."

RACIAL Harmony Day is celebrated annually on July 21 to remember the racial riots between Malays and Chinese in Singapore, the first of which started on that day in 1964.

That year, two riots erupted following Singapore's merger with the Federation of Malaysia in September 1963.

At that time, the Malays in Singapore were upset that despite the merger with Malaysia, they would not be entitled to special privileges under the 1957 Federation of Malaya Constitution.

The first riot began when Malays and Chinese exchanged taunts and insults during a celebration of Prophet Muhammad's birthday at the Padang on July 21.

The ensuing violence lasted five days and left 22 people dead and more than 450 injured - the highest number of casualties in a local riot.

The second riot broke out in September when a Malay trishaw rider was stabbed to death.