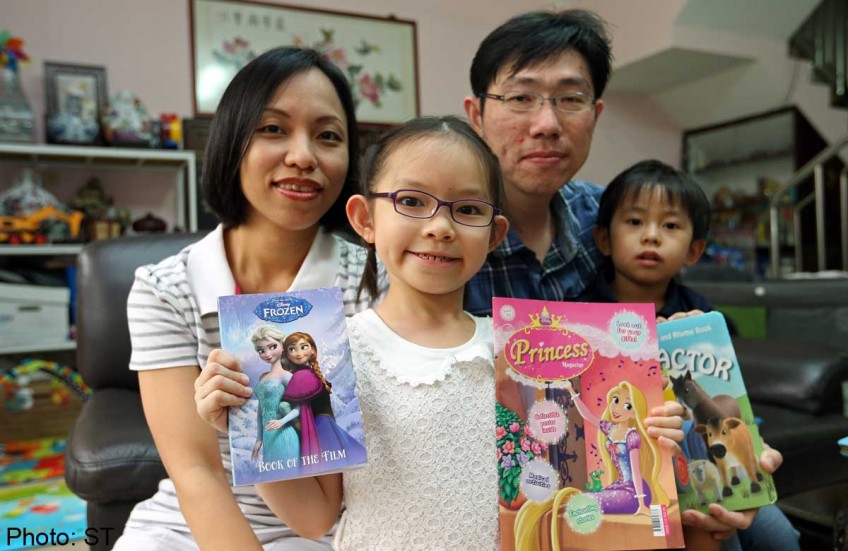 Mother-of-three Loo Leng Leng tries to let her kids read whatever they pick out, to encourage their love for reading. But she is uncertain about fairytales for her seven-year-old girl, as these tales might promote the idea of love at first sight, and having to be rescued by Prince Charming. She discusses the tales with her daughter after reading, to let her know that it is just fiction. (left) Loo Leng Leng, 39, with her daughter Reanne Teo, 7, and her favourite books, (2nd from right) husband Jack Teo, 41, and younger son Ziv Teo, 3.

Even though his two young daughters beg to eat schlopp (an ice cream topped with a cherry), point out sneetches (bird-like creatures that live on beaches) and ask about a quimney (a creature that dwells in the chimney), research analyst Manish Kaul does not stop them from reading popular children's writer Dr Seuss' books, which contain all those words that do not exist in the English language.

A teacher might frown at the gibberish, but Mr Kaul, 38, says such made-up words form earworm rhymes that grab the girls' attention and "give them an open imagination to invent little worlds".

"Of course, I have to tell them that these are made-up words and don't mean anything," he adds, referring to his daughters, two-year-old Riana and seven-year-old Diya.

He says he does not place any restrictions on his daughters' choice of reading material because he wants to nurture their love of the written word.

The girls have enjoyed books by children's authors Julia Donaldson (The Gruffalo) and Eric Carle (The Very Hungry Caterpillar), Indian folk tales and the Fancy Nancy series - an illustrated book of a young girl with a larger-than-life personality and a penchant for boas, tutus, fairy wings and "anything French".

Mr Kaul adds: "You cannot force a child to read, unless it is something he is interested in. I would love for them to read the classics, but there is a time for that."

Like him, most parents SundayLife! spoke to allow their young children to pick out the titles they want, but the adults ensure they read summaries first to ascertain that the books are appropriate reading.

For some parents, a major bugbear is badly written and edited books.

Polytechnic lecturer Chao Jang Yuan does not allow her eight-year-old daughter Raeanne to read books produced under the Barbie franchise, as she says these are riddled with punctuation and spelling errors.

When Raeanne asks for a book, Ms Chao, 39, reads the book's summary and a chapter to screen its level of English before she agrees to buy it.

"I'm the main curator," she says. "I would like for her to keep reading, stay inquisitive and learn good values."

As for administrative secretary Esther Teo, a teacher had advised her 11-year-old daughter Sarah against reading the local Mr Midnight horror series as its sentence structure and phrases were not consistent with what was taught in school.

Ms Teo, 41, then suggested other titles, such as the Percy Jackson and Hunger Games series, which her daughter took to.

She also introduces her daughter to biographies of inspirational people such as Nick Vujicic's Life Without Limits, about the emotional struggles the writer went through, having been born without arms and legs; and Katie Piper's Beautiful, which traces the author's road to recovery after being injured in an acid attack.

"I would like for my children to know these authors' struggles and how they rose above their challenges, so they can apply these lessons in the future," says Ms Teo, who has another daughter, seven, and a son, 14.

Relationship manager Serene Lee, 35, does not read dark tales to her four-year-old daughter Chloe, in case she gets nightmares.

But some children take to horror tales better than others, says Ms Fiona Walker, principal of schools at Julia Gabriel Education, who advises parents to understand their child's personality before picking out books for them.

In general, topics such as death, reproduction and disasters with casualties are not appropriate for children below six years old, says Ms Josephyne Ho, senior principal at EtonHouse.

Moreover, Ms Walker adds that it is advisable to start with books on routine, such as those narrating trips to school or the dentist for children five years and below; then move on to those that involve friends, such as a group of friends going on an adventure.

While Ms Lee's bookshelf at home carries books with "happier themes" such as books on animals and fairy tales, she says stories of fairy princesses dancing to their happily-ever-afters, courtesy of a handsome Prince Charming, could be problematic.

"I give Chloe a variety of reading material because if our home was full of princess stories, it does not send a good message to the child."

But since these fairy tales are ubiquitous, it makes no sense for parents to completely ban them, says housewife Joanna Lin, 32. While her six-month-old daughter Andrea is too young to absorb the tales, Ms Lin says she would read her some princess tales - for balance - along with other stories in the future.

"If not, it might have the opposite effect and she might become too fascinated with boys," she says.

The book based on the hugely successful Disney movie Frozen (2013), for example, teaches values such as caring for one's sibling and the fact that love at first sight might not be real, says Ms Loo, who has read the book with her daughter Reanne, seven.

"Fairy tales help perk her interest, but you cannot just dump them on the child," she says.

She discusses the themes with the girl after reading. As she explains: "Reading is about soft learning. Once children are able to read on their own, their worlds broaden and they are able to learn so much more independently."

Also off-limits for some parents are books that feature witchcraft, such as the Harry Potter series, which contain dark themes such as death, revenge and torture.

Ms Teo's children have not asked for them, but she says she will attempt to dissuade them if they do.

If they insist, she will read the books with them and discuss the themes together afterwards.

This seems to be the way to go, according to experts.

Ms Walker suggests parents avoid using negative words to describe a book they do not want their child to read.

Ms Ho adds that parents can, instead, go through the summary of the book quickly, then divert the child's attention to another topic of discussion or a substitute book.

As Ms Walker puts it: "Don't say a book is 'bad' because it intrigues a child, which could be more risky."