Record number appoint guardians to act for them 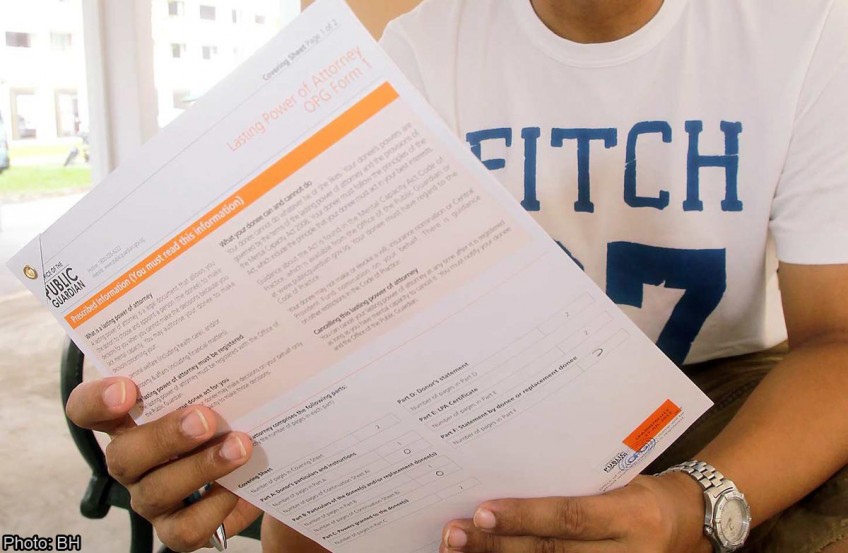 A record number of people have appointed guardians to make decisions on their behalf if they should lose their mental faculties, in the wake of a high-profile court case last year where the issue surfaced.

This year, the Government is hoping to get an even greater number to sign up for the Lasting Power of Attorney (LPA), by launching a publicity blitz and waiving its $50 application fee for now.

Last year, 3,250 people signed up, a 37 per cent jump over the figure in 2013, according to the latest statistics from the Office of the Public Guardian (OPG), which administers the scheme.

More than half did so in September and October, following Straits Times reports highlighting the case of Chinese national Yang Yin, who is accused of manipulating an elderly widow into handing him millions in assets.

An LPA is a legal document that allows a person to appoint an individual to make key decisions for him, should he become unable to do so. Anyone who is at least 21 can sign one.

Yang, 41, has been accused by Madam Hedy Mok of manipulating her aunt, Madam Chung Khin Chun, 88, into handing over her assets worth an estimated $40 million.

She has also accused him of breaching his duties under the LPA, which was eventually revoked in November last year.

Such abuse is rare, and rather than putting people off, the case seems to have increased public awareness.

Remisier Lim Meng Hong, 58, was among those who signed up last year.

The mother of three said: "It makes sense. You never know, you may suddenly fall ill."

While the OPG said it "saw a very encouraging increase" in the number of applications during the last four months of last year, its spokesman said: "We hope more people will know about the benefits of making an LPA, and do so when they still have the mental capacity... Anyone can lose mental capacity at any age."

To help people make up their minds, it started a campaign on Monday, in print, television and social media, where two siblings fight over who should have the final say in handling their father's finances.

But some people remain reluctant to do so.

Retired engineering officer David Kwok, 64, said the newspaper advertisements have informed him about the LPA, but the cost of several hundred

dollars for a doctor or lawyer to witness and certify the LPA form is stopping him from going ahead.

"If it's free, I would consider. Not just me, I think many of my friends would too," he said.

Getting the LPA witnessed and certified will not be free, but until September next year, it will be cheaper to sign up for one, as the OPG is waiving its $50 application fee during this time.