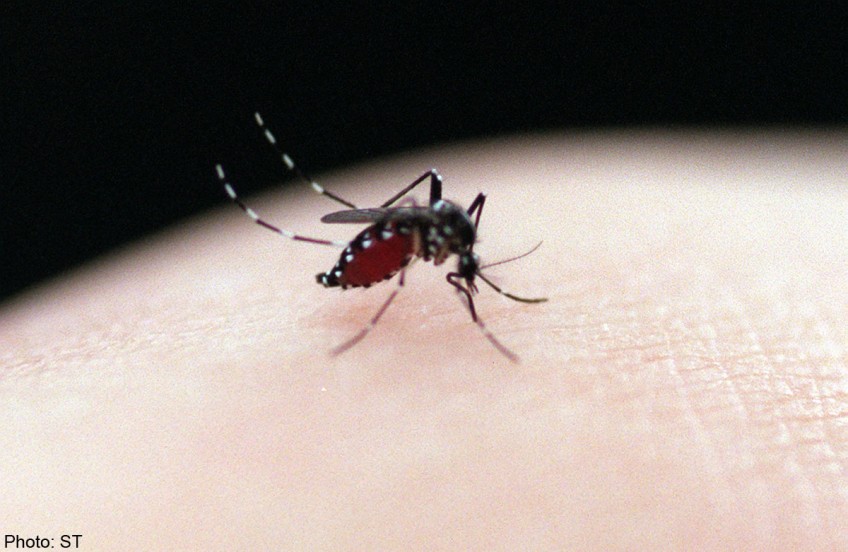 SINGAPORE - A dengue cluster in Choa Chu Kang with 316 reported cases is the highest on record so far, according to a statement by the National Environment Agency (NEA) on Wednesday.

Last year, the cluster with the highest number of cases was located in Tampines, with a total of 233 cases.

As of July 15, there are six dengue clusters located in Choa Chu Kang, with a total of 394 cases, said the NEA.

It urged all residents and stakeholders to take urgent steps to reduce the mosquito population in the area.

Three workers from the Keat Hong Sunshine Gardens construction site were the first to contract the virus on June 25, while cases involving residents were reported two days later.

The statement added that in the last two weeks, the majority of the cases reported in the cluster concern residents, with a majority of breeding areas located in residential premises, "hence there is an urgent need for residents to remove stagnant water in their environment to prevent dengue transmission."

Here is the full statement from the NEA:

As at  July 15, 2014, there are six dengue clusters located in Choa Chu Kang, with a total of 394 dengue cases reported. One of these has a total of 316 reported cases, making it the cluster with the highest number of dengue cases on record. Last year, the cluster with the highest number of cases was located in Tampines, with a total of 233 cases. We are currently at the peak dengue season and expect the cases at the Choa Chu Kang clusters to rise further. All stakeholders need to play their part to reduce the mosquito population urgently.

In the last two weeks, the majority of the cases reported in the cluster are residents. The majority of breeding found are in residential premises and hence there is an urgent need for residents to remove stagnant water in their environment to prevent dengue transmission.

From NEA's inspections so far, 86 breeding habitats have been found in homes, of which the majority were found in domestic containers such as pails, flower pots, trays and ornamental containers. Residents who were not available when NEA officers visited their homes should arrange for another inspection as soon as possible. NEA is also making arrangements to inspect inaccessible units. NEA seeks the co-operation of all residents to allow NEA officers entry into their homes for inspection and spraying of insecticide.

Dengue alert banners and posters have been put up at lift lobbies. Five rounds of house visits have been conducted by grassroots volunteers. Member of Parliament (MP) for Chua Chu Kang GRC Mr Zaqy Mohamad and 120 volunteers conducted house-to-house visits on 13 July 2014, while MP Mr Gan Kim Yong and 40 volunteers visited the affected blocks in his constituency yesterday evening. Repellents and granular insecticide were distributed to residents during the visits. A total of 56 residential blocks were covered during the house visits.

NEA, together with the other Government agencies from the Inter-Agency Dengue Task Force, as well as all Town Councils, are continuing to check public areas and housing estates for potential breeding grounds, with officers carrying out daily checks for breeding habitats in these areas. We are also eliminating adult mosquitoes through measures such as space spraying and Gravitraps.

NEA has conducted more than 1.8 million inspections this year and will continue to focus on areas that have higher potential for dengue transmission, such as construction sites. This year, we have issued 476 Notices to Attend Court and 49 Stop Work Orders, and 13 contractors have been prosecuted in court for repeat offences as of July 7, 2014. We will continue to prosecute recalcitrant errant contractors in court and press for deterrent sentences.

Inverting pails and plant pot plates, changing water in vases regularly, and capping bamboo pole holders when they are not in use are simple steps that everyone can take to prevent mosquitoes from establishing a foothold in our neighbourhoods.

Those infected with dengue should protect themselves from mosquito bites by applying repellent regularly, and those showing symptoms suggestive of dengue should see their GPs early to be diagnosed. The latest updates on the dengue situation can be found at the Stop Dengue Now Facebook page, www.dengue.gov.sg or the myENV app.