A shark was rescued from an oil refinery off the south coast of Singapore last week after it became trapped in a well that sucks in seawater to cool the facility.

It was stuck in the bay, which measures three metres by five metres, for two days before being retrieved and released by local animal welfare group the Animal Concerns Research and Education Society (Acres).

A four-person rescue team took half an hour to extricate the shark, which is believed to have entered the bay through a hole in its steel perimeter. The animal’s sensitive snout was badly injured, possibly from hitting against the sides of the intake area.

Acres volunteer Gabriel Cai used a six-metre-long telescopic pole attached to a two-metre-wide net to scoop the shark out of the well.

“I was trawling the net blindly through the water, until I felt resistance and the water started splashing,” Cai, an engineer by trade, told This Week in Asia.

The rescue team then hoisted the shark — which weighed around 30kg — out of the bay, checked it for injuries and released it back into the ocean.

“To see the shark go back to the open water and swim away was a very rewarding feeling,” said Acres rescue officer Muhamad Safari Bin Masnor.

“I used to dive with sharks back in Indonesia when I was teaching scuba diving, but I never thought I would rescue and release a shark.”

Shell plc confirmed in a statement that a reef shark found in a seawater intake bay at its facility on Pulau Bukom on June 13 was “successfully rescued and safely released back into the sea”. 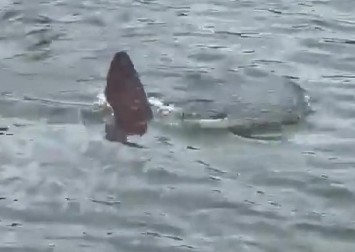 The company said it “remains committed to operate in an environmentally and socially responsible manner” and would be taking action “to enhance preventive measures” at its seawater intake areas, without going into detail.

Kalai Vanan Balakrishnan, co-chief executive officer of Acres, said he was glad Shell was looking into fixing a gap in the wall of the bay to ensure the problem did not reoccur.

Acres has rescued sharks, sea turtles and a dolphin that became entangled in fishing gear in recent years.

The society was called out to rescue a sea turtle that had become trapped in an intake bay at the Shell Energy and Chemicals Park in 2017. The turtle was lifted out using a crane and taken to a nearby island before being released.

Blacktip reef sharks are threatened by habitat loss, pollution and shipping in Singapore’s waters, but are not classified as endangered.