Regrets over baring it all in Malaysia 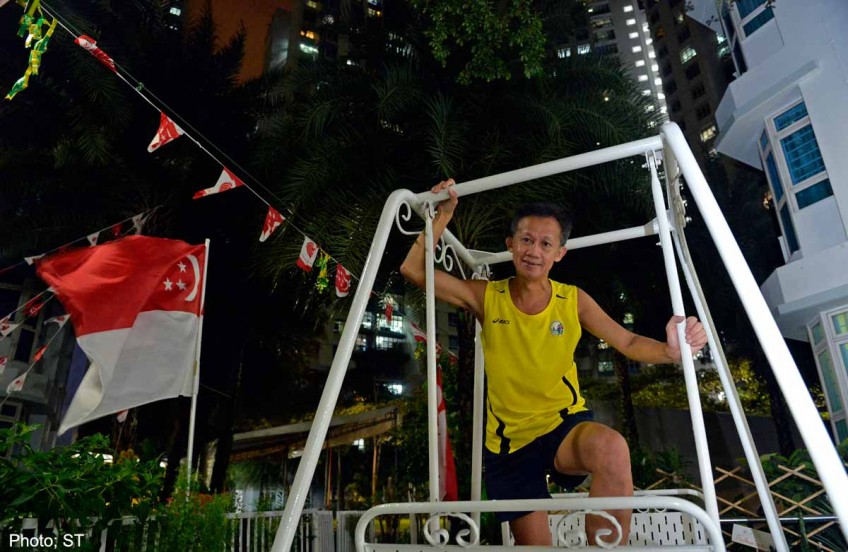 He's the nudist behind the controversy last year in Penang.

And Mr Albert Yam Kam Hoong has a few regrets.

He regrets uploading videos of the event onto a video sharing site, which drew outrage from Malaysian politicians and netizens.

He also regrets surrendering to the Malaysian police as he claims he got the short end of the stick.

But there is one thing which he is not remorseful for: being a nudist.

Says Mr Albert Yam Kam Hoong, 47: "I have no regrets being a nudist. There's nothing wrong with it.

"Only thing I regret is going to Malaysia to do it. In Thailand or Indonesia, we would have no problems at all."

He and seven others were jailed for their participation in what was called the "Nude Sports Games 2014" in May last year.

All received month-long sentences for public obscenity, but Mr Yam was jailed for another six months for distribution or possession of pornographic material.

The video, filmed by Mr Yam, showed them painting each other's bodies, dancing and rolling over one another.

The New Paper on Sunday caught up with Mr Yam on Thursday. He was released from a Penang state prison last Dec 26.

Since his return to Singapore on Jan 2, he says he has been depressed. Not only did he lose weight, the avid marathoner says his health declined and he no longer has the fitness to run marathons.

His voice softens when we ask about his prison experience: "It was horrible. They put the sick inmates with the healthy ones, and there were also cases of scurvy."

Mr Yam, a stalwart nudist who picked it up because of its "natural benefits", says the prison conditions were too much for him to bear.

He now regrets surrendering to the Malaysian authorities. He was told it was a minor offence and surrendering would help his plea.

"I didn't expect so much jail time. I suffered a lot in there," says the de facto leader of SgNudClub, a Yahoo online group for local naturists.

Naturism is another name for nudism. The two words are used interchangeably, he says.

Several of the members now shun him and blame him for causing the furore when he uploaded the video of the Penang event onto a Vimeo account.

He had uploaded other videos before, so he was stumped as to why the latest video got him and his members in trouble. Some in his circle of friends and colleagues who didn't know about his habits before now question him about his activities.

While out and about, he says people recognise him from the videos and talk about him behind his back.

Mr Yam says: "I don't hear what they say about me, but I know they're talking about the naked pictures and saying all sorts of ugly things about me."

He explains that the videos were meant to promote another nudist event last December and were for the members' private viewing.

The event was eventually cancelled because of the case, he says. He did not expect the videos to be shared with the public and become viral.

"Malaysians and Singaporeans have conservative views on nudism and cannot accept it yet. They think it is immoral, but I believe there is nothing wrong with embracing our natural self."

Public nudity is illegal in both countries, a fact Mr Yam knows well. Nudists here skirt around the law by holding indoor events away from the public eye.

"We have yoga sessions, pot luck dinners, karaoke and mahjong sessions all done in the nude. But sometimes, members also want to do these activities outdoors."

So, they would pick secluded beaches in Singapore to meet up.

No sex is allowed in these events as it goes against the ideals of naturism, say Mr Yam.

He admits that in reality, it is difficult to enforce the no-sex rule once the event ends.

"I can't stop people from hooking up after that. It's their choice. But it is not right and my role was to advocate the right way to them," he says.

"I agree with them. I would say that 90 per cent of naturists here have the wrong intentions, but I will try to correct them," he reveals. He estimates that there are about 100 active nudists here, aged between 17 and 70.

For now, Mr Yam has chosen to lie low and avoid taking part in nudist events. He wants to focus on his new career in the service industry, and his family. His wife and three daughters have seen the video.

"My wife and my daughters are not naturists but they have been supportive of me and my hobbies, even before my arrest," he says, adding that he is thankful that his daughters' classmates and friends have yet to join the dots.

"I don't want my daughters to be bullied because of me. Maybe I'll start doing it again only when nudism is more accepted here."