Relief and tears at Primary 1 balloting 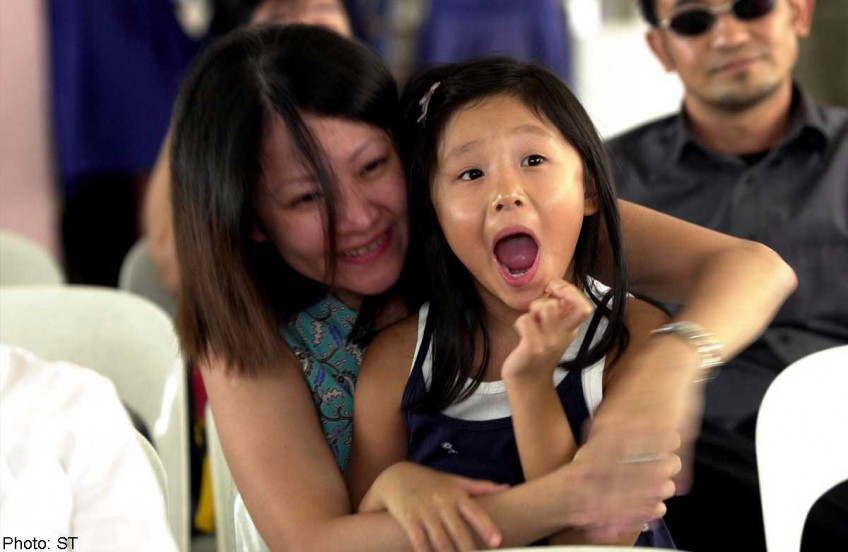 Mrs J. Yeo, 34, hugging her daughter as her child's name was pulled out of the ballot box at CHIJ St. Nicholas' Primary back in 2005.

He did not even dare open his eyes while the ballot was going on at Henry Park Primary's teaching lab. And all Jasper Kee managed as his son's name was called out was a sigh of relief.

Henry Park had 39 children vying for just 28 vacancies under phase 2A2 of the Primary 1 balloting exercise and the manager in the shipping industry was one of the parents who landed a coveted place for his son.

"I've been very stressed, and it's very tense for all parents inside," Mr Kee, 28, said. "For those parents whose children didn't get in, I feel their pain."

The tense scenes and even tears were repeated at three other oversubscribed primary schools - CHIJ St Nicholas Girls', Nan Hua and Radin Mas.

Yesterday's ballot was for places under phase 2A2, which caters to children whose parents or siblings are former pupils of the school.

But this year, for the first time since 1995, balloting is required at the 2A2 stage. Yesterday's ballot was for children in phase 2A2 and who live more than 2km away from the school.

At Radin Mas Primary in Bukit Merah, only four spots were available for 11 kids under the ballot scheme.

Refinery technician Samad Samir, 45, whose elder son had studied there, was surprised at the high volume of applicants.

But other parents lamented the change in the rules, saying that it was "unfair" because they had "no time" to apply to become alumni of the schools.

Typically, children at the 2A2 phase would have no problem entering the schools.

But this year, all schools are required to reserve at least 40 places which are divided equally between children applying under phase 2B and 2C, which means there are fewer places for those under phase 2A2.

Phase 2B is for children whose parents are either school volunteers, active grassroots leaders or are endorsed by the church or clan directly tied to the school. Phase 2C is for children with no links to their schools of choice.

This change was announced at last year's National Day Rally, which meant the parents had no time to join the alumni associations of the schools as they were required to have done so by end June last year to qualify for the 2A1 phase.

Cally Looi, who registered her daughter for a place at Radin Mas, was visibly upset as the girl failed to get a place yesterday.

Ms Looi, 36, who works in the logistics industry, said she was an alumnus of the school but did not join the alumni association in time, a development she called "frustrating".

"Now, we can take only what schools that are left. We are not going to try to get a place in the next phase here. I don't feel reassured with just 40 places."

Mr Kee added: "It's unfair that there was no 'grace period' after the announcement. I regretted not joining the alumni association.

"I'm so relieved my son has got in, because this school has good memories for me."

But MP Baey Yam Keng, who sits on the Government Parliamentary Committee for Education, noted that the Education Ministry has to strike a balance, though it could have given parents some leeway before implementing the new rule.

Said Mr Baey: "Even though it is good that schools have alumni associations, we need to give other parents a chance too."