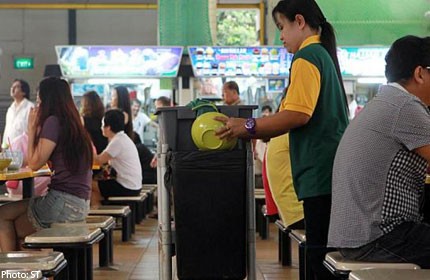 Never mind fresh graduates. Even as primary school pupils, my peers had to face fears of not getting a "good job", thanks to a familiar refrain: "If you don't study hard, you will become a road sweeper when you grow up!"

I don't know if children today are still presented with that worst-case scenario. But if a recent Straits Times survey is anything to go by, perhaps we have moved away from explicitly belittling certain jobs.

The question, then, is whether this is enough.

In the survey, 501 people of working age were given five pairs of jobs and asked to pick the ones they "respect or value" more. A majority said they respect cleaners over factory workers, and waiters over clerical assistants.

At first glance, this might seem like a pleasant finding: People are happy to accord value to more menial jobs. But what, if anything, does it actually mean?

After all, some people might "value" cleaners because they like clean surroundings, rather than respecting them as fellow workers.

Then there is the unhappy possibility that respondents did not respect either job in the pair, in an absolute sense - they just respected one less.

The survey might also just show that people are now more cautious about being disparaging about cleaners and waiters. So let's not pat ourselves on the back just yet. If nothing else, respecting workers in tough or important jobs is a minimum standard for common decency, rather than an accomplishment.

The truest sign that menial jobs are valued is when Singaporeans become open to doing them.

As labour MP Zainal Sapari observed, there is a distinction between jobs people appreciate and jobs they are willing to do.

This may not always be related to perceptions of worth. One can appreciate a doctor's job, think it prestigious, but not wish to have it - because of squeamishness, a preference for nine-to-five hours, or a lack of interest.

But with traditionally less prestigious jobs, it's harder to escape the conclusion that people may say that they appreciate or respect them, yet still see such roles as "beneath them".

Granted, even such lip service is a start. But we must go further and remove the bogeyman of the "bad job" not just from discourse, but from mindsets. Being a cleaner or waiter should not be seen as a last resort, but as a job that is valuable in its own right.

Higher pay and better working conditions are the first and most important step. For instance, bosses often say that Singaporeans are unwilling to work punishing retail hours. But it is hard to fault workers for shunning a job which pays too little or is too arduous.

If firms want workers to find jobs attractive, they bear the initial burden of making such jobs so: by raising wages, professionalising the job, and improving conditions.

This is under way in the cleaning sector, for instance. Cleaning jobs have been upgraded with the use of machines, and compulsory licensing for cleaning firms, which kicks in next year, will ensure that all cleaners are paid at least $1,000.

This is a start. Many would argue that more can and should be done to improve job conditions in this and other sectors. But the point remains that once the objective quality of a job has been improved, it is mindsets which must change.

In the Straits Times survey, almost a third of respondents thought that "regardless of salary, a white-collar job is always better than a blue-collar job". It is this sort of snobbery which needs to go, if we want to raise a generation not "afraid" of being road sweepers, waiters, or anything else.