Renowned artist to draw the Singapore skyline from memory 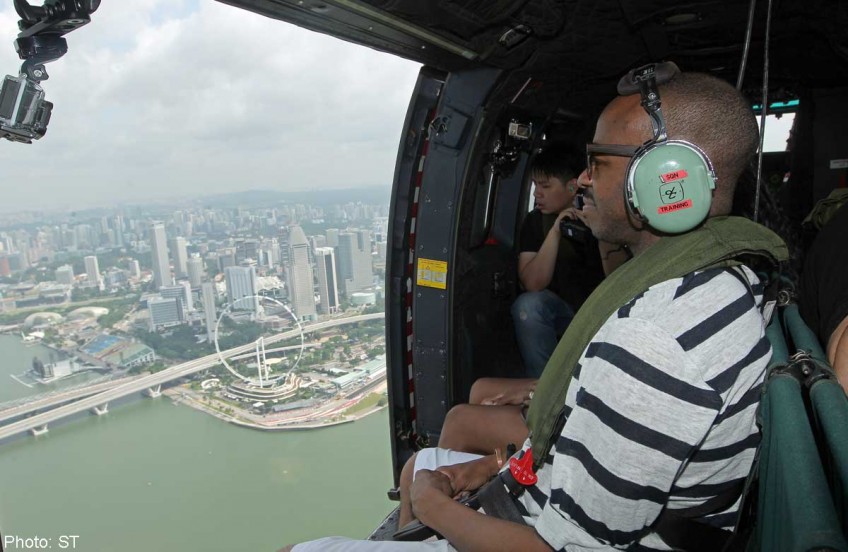 Architectural artist Stephen Wiltshire (above) taking a helicopter ride over the Marina Bay area yesterday. The aerial view will help him prepare for drawing the city from memory.

The "See the Big Picture" event will see Mr Wiltshire draw the Singapore cityscape from today to 20 July. He will do this in full view of the public at the main atrium of Paragon shopping centre.

Mr Wiltshire is renowned for his amazing ability to draw detailed cityscapes from memory after viewing them once, usually after a brief helicopter ride. He went on a helicopter ride sponsored by the Republic of Singapore Air Force to get an aerial view of the Singapore skyline yesterday.

The 40-year-old artist has drawn major cities such as London, New York, Shanghai, Tokyo and Hong Kong, among many others. This is his first visit to Singapore and his first attempt at drawing the Singapore skyline.

The completed 4-metre by 1-metre artwork will be presented to President Tony Tan later this year, as a gift to the nation to mark Singapore's 50th anniversary in 2015.

This morning, Dr Lee Boon Yang, Chairman of SPH, handed a pencil to Mr Wiltshire to kickstart his work on the panoramic artwork, which is scheduled to be completed on 20 July.

President Tony Tan will visit Mr Wiltshire at work tomorrow (17 July), together with HE Antony Phillipson, the British High Commissioner to Singapore, as well as senior officials from the Urban Redevelopment Authority (URA) and the Ministry of Culture, Community and Youth (MCCY).

There will also be visits by arts students from School of the Arts (SOTA) and Nanyang Academy of Fine Arts (NAFA) to catch the artist in action at Paragon on 18 July.

Students from the Little Arts Academy and Pathlight School, as well as beneficiaries from Very Special Arts Singapore, will also get a chance to witness Mr Wiltshire at work on 19 July.

Mr Lawrence Wong, Minister, Ministry of Culture, Community and Youth, and the Head of SG50 Programme Office, will be the Guest of Honour at the completion ceremony to witness Mr Wiltshire adding the final touches to his masterpiece on July 20.

Apart from catching Mr Wiltshire's live drawing, visitors can also admire his past works at an exhibition at Paragon from July 16 to 20. Replicas of some of his most famous works, which captured stunning details of major cities, will be exhibited.

Visitors at the exhibition can also play the "Join the Big Picture" game at an interactive booth. They can take photos of themselves and select their favourite sketches of iconic Singapore buildings such as Marina Bay Sands and the Esplanade as the background. They can then upload and share their photos with friends via social media on the spot.

Dr Lee Boon Yang, Chairman of SPH, said: "At SPH, we attribute our success over the last 30 years to the unstinting support of our readers, advertisers, business partners and the general community. Our success reflects Singapore's success. 'See the Big Picture' is a testament of our commitment to all our stakeholders and to Singapore, as we strive to strengthen our position as Asia's leading media organisation."

Visit these social media sites for updates and more information on "See The Big Picture":