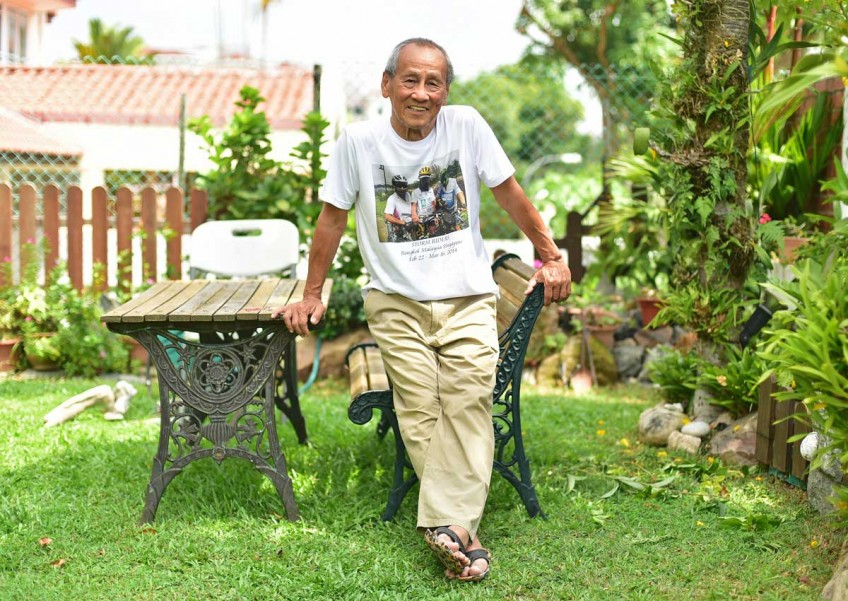 Mr Tan says he has many “crazy ideas” and that he is always thinking of what to do next for charity.
The Straits Times

Walking a rough equivalent of the distance from Singapore to Penang is quite an achievement for a young person, let alone a 75-year-old.

Walking around 20km a day for 38 days, Mr Tan, however, did not walk the trail for religious reasons but to "seek adventure".

"The two things that attracted me were the idea of doing something unknown and the prospect of attaining any spirituality," he told The Straits Times in his semi-detached home off Loyang Avenue.

The walk was not just for his personal satisfaction. By putting the word of his attempt out to his friends and relatives, the former director for sports excellence at the Singapore Sports Council raised more than $20,000. He has donated the money to the Church of Our Lady of Perpetual Succour, which provides for the needy.

Mr Tan was an avid sportsman in his younger days, dabbling in sailing, tennis and golf. He was also the swimming captain in his secondary school in East Coast.

Before he spent 25 years at the Singapore Sports Council, he was a physical education teacher with the Ministry of Education after winning a British Council scholarship.

The determined senior continued walking despite a minor fall in the first week, and a cold and cough.

He found it physically and mentally challenging. Although he was on the route with other trekkers, Mr Tan said he felt "alone". It was also the first time he felt he had gone outside his comfort zone. "Everything I had was in my haversack," he said.

Mr Tan filmed himself on his walk, and sent the videos to his wife, two children, grandchildren and friends whenever he could find an Internet connection.

"After hours of walking, I still had to walk around to find an albergue (hostel)," he said. "If you were late, there'd be no space. On those days, I slept in churches, on mattresses packed like sardines."

Mr Tan heard of the walk about five years ago. He brought just one spare set of clothes and no detergent as it would increase his backpack load. To prevent blisters, he wore plasters and a lining in his socks, and broke in his shoes three months before the trip. Training involved walking 10km for breakfast.

"I underestimated the whole thing," he admitted. "The terrain was not the same as during my training here and it was extremely cold on some days."

Even a 70 per cent blocked coronary artery and stress haematuria, a condition that acts up with strenuous exercise, did not stop him. He made sure, however, to get his doctor's permission .

"I almost gave up, but after I finished it all, I realised that the human spirit can do wonders."

While the hike ranks high on the list of difficult tasks he has accomplished, he is no stranger to pushing himself to the limit for charity.

In 2014, he was part of a trio who cycled 2,000km from Bangkok to Singapore to help Filipinos here whose families were left destitute and homeless by Typhoon Haiyan. They took three weeks and traversed the eastern coasts of Thailand and Malaysia, raising $12,000.

But Mr Tan has not always been this active. At one point, his career took up all his spare time. Even after he left the Singapore Sports Council, he continued working as the general manager of a golf club.

When he retired at the age of 68, he resumed exercising by walking and cycling. "My life started after I retired. I feel like I am much fitter than I was at 40 or 50," he said.

Not one to idle, Mr Tan said he has many "crazy ideas" and that he is always thinking of what to do next for charity.

Another brainchild of his is to salvage old bicycles, restore them and donate them to needy people in Singapore, Batam, Bintan and Johor Baru - and also teach them how to refurbish their own bikes.

Inspired by a quote from Mother Teresa, he said: "Not all of us can do great things. But we can do small things with great love."