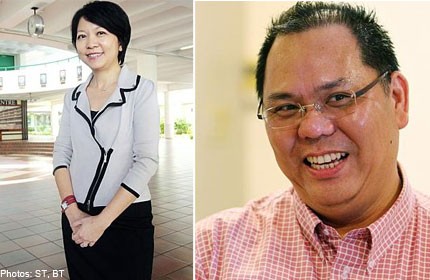 SINGAPORE - Sources close to the school said Mr Chan Poh Meng, the principal of Victoria Junior College, will take over when she leaves at the end of the year.

Here is the full statement from Raffles Institution:

As Principal of the re-integrated Raffles Institution, Mrs Lim led the school to attain the prestigious Singapore Quality Award in 2011, affirming the school's achievement of world-class standards of organizational effectiveness. Marrying her deep belief in the holistic education of young people with her wealth of experience in education and community involvement, Mrs Lim brought to the re-integrated Raffles Institution a renewed focus on serving the community while preserving the ethos and culture of excellence that both institutions embody. For her contributions to education, she was conferred the Chevalier dan Ordre des Palmes Academiques by the French Education Minister on 26 April 2012.

A visionary leader, Mrs Lim implemented several curricular innovations during her tenure as Principal. She established a seamless framework for a six-year holistic curriculum and introduced a number of innovative local and international programmes that richly enhanced student learning beyond the traditional classroom. Notable initiatives include Gap Semester (where Year 4 students spend 10 weeks pursuing a diverse array of disciplines beyond the syllabus), the EW Barker Institute of Sports, Raffles Leadership Institute, Raffles Science Institute, the Raffles Community Initiative (connecting Rafflesians to the larger community to serve the common good on a variety of platforms) and Raffles Diploma (a criterion-referenced certification jointly awarded by Raffles Institution and Raffles Girls' Secondary that recognises student participation and achievements in the various domains: Cognitive, Character and Leadership, Community and Citizenship, Sports and Health, and Arts and Aesthetics).

Mrs Lim was deeply committed to the holistic development of students and the professional development of staff. A hands-on leader who took time to interact with individual students, staff, parents and alumni, she will be remembered for her boundless energy, enthusiasm and warmth of personality.

RI's Board of Governors would like to put on record its deep appreciation to Mrs Lim for her visionary and pivotal leadership of Raffles Institution and Raffles Junior College in the last six years. The Board wishes her the best in her future endeavours as she moves on to pursue new areas of interest in the higher education sector.

The Board warmly welcomes Mr Chan Poh Meng, 56, a former Rafflesian and President Scout (1975). He is also a graduate of National University of Singapore and holds a Masters Degree from Indiana University.

An experienced school leader and the current Chairman of the JC Principals' Conference, Mr Chan is well regarded by his peers and has distinguished himself in various capacities in the education service. He was formerly Principal of Outram Secondary School and also served as Superintendent for a school cluster in the East Zone. He is currently the Principal of Victoria Junior College. For his contributions to education, he was awarded The Public Administration Medal (Silver) in 2005.

He is the President of the Academy of Principals (Singapore) and has helmed it for 4 years. Through the academy, he is very involved in partnering the Ministry of Education and National Institute of Education in providing support for Singapore school principals and in contributing toward building sustainable school leadership through strong and mutually-beneficial networks. In his work as President, he also interacts with educators and teacher-educators all over the world, bringing in some of the best educators to work with Singapore school principals.

The Board is confident that Mr Chan's wealth of experience, extensive networks and leadership in education will build upon the legacies of his predecessors and lead Raffles Institution to serve the needs of society and Singapore.