Rise in 'swatting' pranks may have deadly results 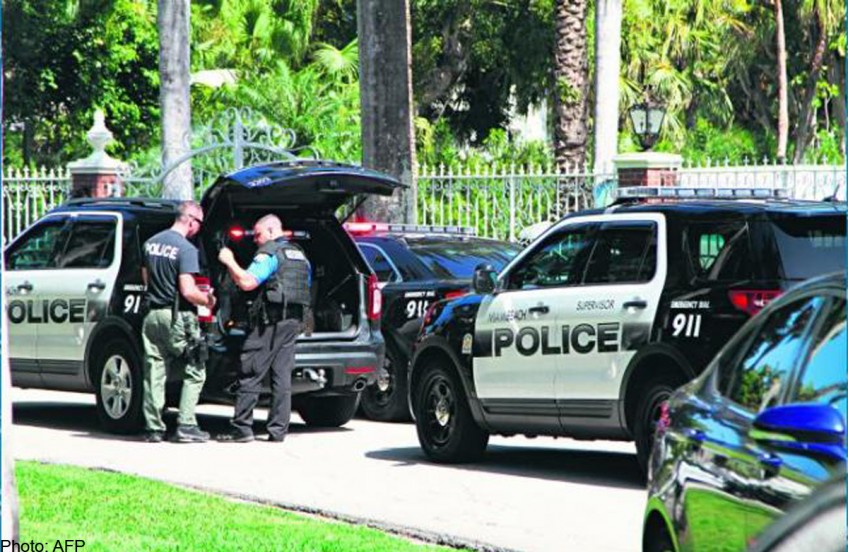 NO JOKE: The Florida police outside rapper Lil Wayne's house, where shots were falsely reported to have been fired. "Swatting", or calling emergency services and claiming a crisis, is gaining popularity in the US and abroad.

WASHINGTON - When Florida police got a call from a man who said he had shot four people at rapper Lil Wayne's house this month, they responded as they were trained to.

Heavily armed, sporting body armour and accompanied by sniffer dogs, officers surrounded the Miami mansion after the alleged shooter told the 911 dispatcher: "I'm killing whoever else I see..." But the police found no shooter at the house, and no victims. Lil Wayne was not there either.

The rapper was the target of a "swatting" prank, a phenomenon gaining popularity in the United States and creating public safety risks and budget strains for law enforcement.

The stunt - a modern day and much more serious version of a prank call - involves a call to emergency services claiming a crisis.

When the police arrive, the alarmed victim is often greeted by angry bangs at the door from screaming officers with cocked guns.

Special Weapons And Tactics (Swat) units - which the term swatting comes from - are usually dispatched because they are trained to deal with the serious emergencies that swatters typically report falsely, such as hostage taking, mass shootings, bomb threats and domestic violence.

The police are obliged to respond to emergency calls, but say such pranks are a waste of resources.

Lil Wayne is not the only celebrity swatting victim.

Ashton Kutcher, a famous Hollywood prankster and host of the hoax show Punk'd, has been swatted, along with Justin Bieber, Rihanna, P. Diddy, Justin Timberlake, Tom Cruise and Miley Cyrus.

The phenomenon of swatting was first reported to the Federal Bureau of Investigation in 2008 and has steadily gained popularity since.

Officials estimate about 400 swattings occur every year, but many no longer report incidents to prevent copycat acts and to avoid giving swatters publicity.

The hoax is popular in the online gaming community, where swatters target online rivals who are live-streaming a game. When the police arrive, the stunt is broadcast in real time.

Swatting videos show victims at their computers when they are interrupted by loud bangs at the door, followed by heavily armed police officers storming their homes.

Perpetrators target online rivals and access their addresses by hacking their computers.

The police consider the act a dangerous crime, and say swatting is a serious public safety issue.

"It is a serious crime, and one that has potentially dangerous consequences," said the FBI. Beyond being a waste of resources, the police say swatting creates major risks.

Some hapless victims were carrying objects that could be mistaken for a weapon. Others grabbed a real gun, mistaking law enforcement for intruders. The police are at risk too - in one incident, an officer was injured in a car accident while responding to a swatting hoax.

But tracking perpetrators is tough, as callers use software to disguise the calls' origin or place the calls from untraceable Internet sites.

Though there is no federal swatting legislation in place, punishment can be tough for swatters who are caught.

In 2009, 19-year-old Matthew Weigman was sentenced to 11 years in prison for orchestrating several swattings. The blind phone hacker, who was a member of a swatting ring, had been making fake calls to the police for five years.

Despite moves to strengthen punishments, the phenomenon continues to gain momentum, both on US soil and abroad.

Last week, French television host Enora Malagre was a victim of swatting when a man called the police, claiming that he had stabbed her and threatening to shoot at the police.