Roar of approval as Red Lions keep sole use of name 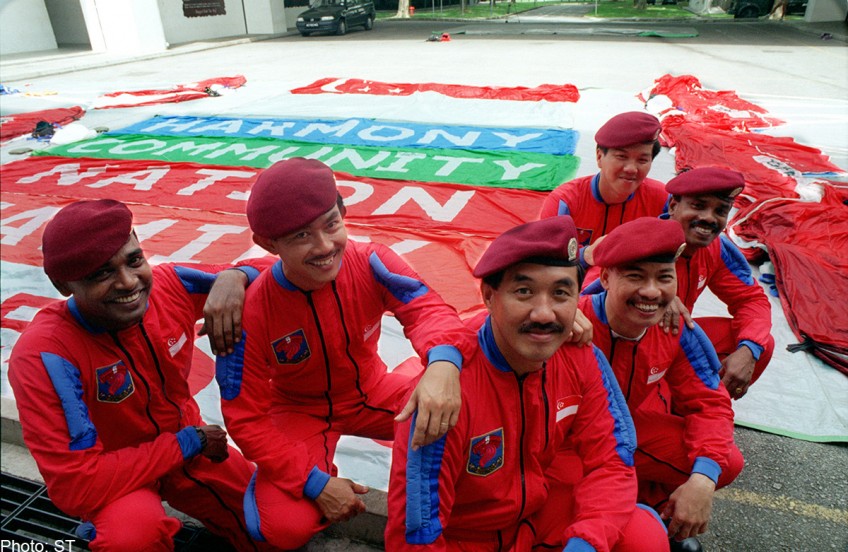 WHEN former parachutist Pach Ang saw on Facebook two Sundays ago that Singapore's aquatic athletes had called themselves "Red Lions", he was stunned.

For nearly 20 years, the name was exclusive to the elite paratroopers of the Singapore Armed Forces commandos.

"I thought someone was joking," said the 53-year-old over the phone from Abu Dhabi, where he is based.

"It did not feel right... Even though we did not register the name as a trademark, the Red Lions have become somewhat of an icon that people identify with NDP parachutists," he added, referring to the National Day Parades where the Red Lions have been the annual star attraction.

His unease was echoed by many others - soldiers past and present, and members of the public.

It ended a rebranding campaign which lasted just five days.

It was a quick and sweet victory for Mr Ang, who coined the name and designed the distinctive red-and-yellow insignia in 1995.

He said he was then inspired by the military parachuting teams around the world, which already had names to distinguish themselves.

"Rather than just being called SAF paratroopers, I felt we needed a stronger identity and a name that best describes our efforts and our spirit," said Mr Ang, who now runs shows and events in the United Arab Emirates.

The Defence Ministry declined to comment further and reiterated that it welcomes SSA's decision not to use the name Red Lions and that it supports Team Singapore athletes.

But support for the "free-fallers" has been unwavering.

Mr Eric Khoo, who was the chief commando officer when the Red Lions name was launched in 1996, said the name was befitting of the elite troopers within the commando formation.

He said: "Landing in the stadium, with the hot air... the spectators and the many obstacles from the infrastructure, is no easy task."

Mr Lam Shiu Tong, who served as the chief commando officer and commander of the Special Operations Task Force from 2006 to 2011, said he has learnt how to be a better leader from his time spent with the Red Lions.

The retired brigadier-general, who is 49, had trained with the Red Lions when he was preparing to take part in the 2009 NDP.

In a 2009 essay titled The Red Lions: An Example Of Special Forces Leadership, he said: "The stint allowed me to better appreciate the risks and challenges the Red Lions face in the course of work... The experience enabled me to relate to how Special Forces leaders carry out their duties and respond in adversity."

The elite corp's uniqueness and renowned reputation are reasons why Mr Ang was insistent that its moniker should not be misused.

He has chalked up some 3,000 jumps in more than two decades as a parachutist, including the crowd-pleasing stunts during the NDPs.

Even though the aerial ballet and picture-perfect landings do not last more than 10 minutes, the Red Lions spend long hours training, for months at a time, including during the weekends.

Said Mr Ang, who took part in more than 20 NDPs before retiring from the SAF in 2009: "Behind every perfect landing are many bumps and falls, but we know it's worth it when people cheer for us and remember us."