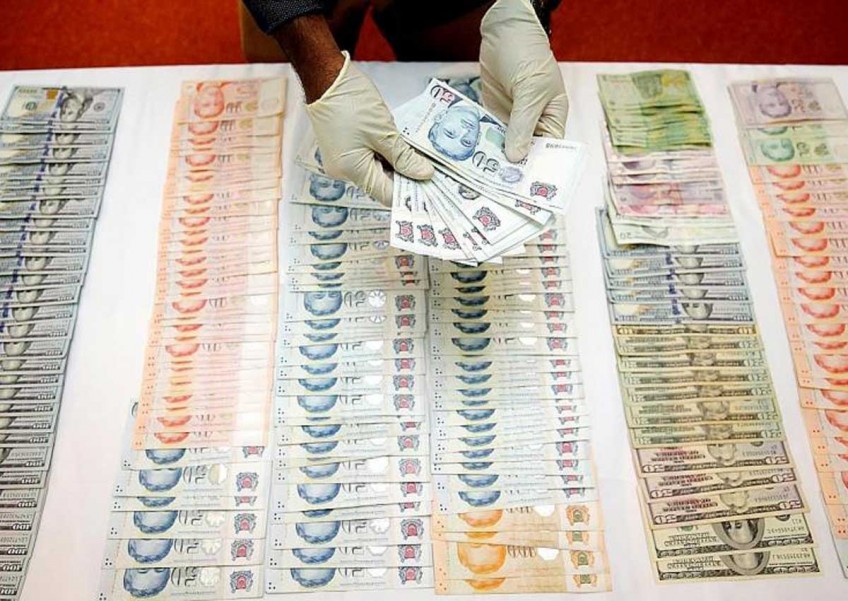 Police recovered various currencies in the Geylang hotel room when they arrested the three Romanians.
Zaobao

Police have arrested three Romanians - two men and a woman who entered Singapore on March 29 on social visit passes - for their suspected involvement in at least 12 cases of theft.

Preliminary investigations revealed that the trio, believed to have travelled here with the intention to commit the crimes, had targeted busy supermarkets and retail outlets across Singapore.

They would first ask a cashier to change currencies into smaller denominations. After their initial request was met, they would make a second request to distract the cashier. During the exchange, they used sleight of hand techniques to sieve out notes from the stack that was returned to the cashier.

The suspects allegedly bought ordinary items such as cigarettes in order to avoid raising suspicions.

Police received multiple reports from supermarket and retail outlet staff between March 31 and April 2, alleging that cash was missing at the end of their shifts. All had similar encounters with the suspects.

Police established their identities after security footage dated March 31 showed them alighting from a rental saloon car near one of the supermarkets.

The trio, aged between 25 and 39, were arrested at a budget hotel in Lorong 18 Geylang after an operation at 5.55am yesterday. Various currencies, including Singapore dollars amounting to $4,996, were seized at the hotel, along with four mobile phones and jewellery. They will be charged in court today. If convicted, they could be jailed for up to three years and/or fined.