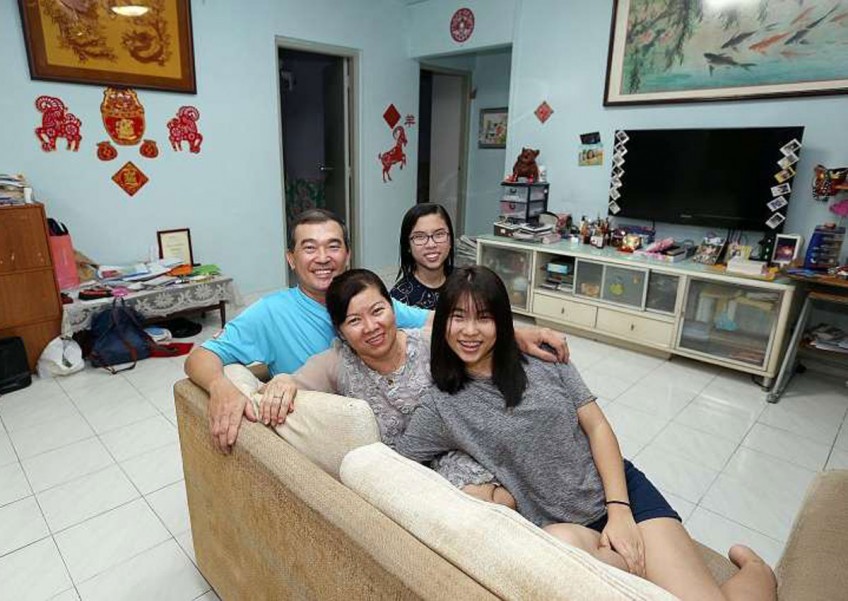 Mr Liew Cheng Liang, 54, with his wife, Jojo Oo, 52, and two of their three daughters, Chloe (foreground), 21, and Evon, 13. Thanks to the HDB's relaxed rule allowing sellers to negotiate for a temporary extension of stay, the family can stay on in their Jurong flat while their new home is being renovated.
The Straits Times

Delivery driver Liew Cheng Liang wanted to sell his four-room flat in Jurong two years ago but feared he would not have enough time to renovate his new place before moving out of the sold flat.

Under a Housing Board rule at the time, flat sellers had to move out once the sale was completed. Any arrangement to stay on had to be made under the table.

So Mr Liew decided not to sell.

The rule was relaxed in July last year to officially allow sellers to negotiate with their buyers for a temporary extension of stay of up to three months.

Between then and the end of last month, about 3,300 sellers have asked to extend their stay, the HDB said when asked for an update.

Mr Liew, 54, is one of them. He sold his flat earlier this month and is staying on for another two months until December, so he can finish renovating his new flat, also in Jurong.

"It's good that they allow us to stay on for longer," said Mr Liew, who lives with his wife and three daughters. "My contractor said he needed more time to renovate the new flat... It would've been so troublesome if we had to move out immediately. We would've had to rent another place and move twice."

The HDB said all applications for extension of stay are granted, for the maximum period of three months from the completion of sale date.

Such an extension helps sellers who, like Mr Liew, need more time for renovation. It also benefits those awaiting funds from the sale of their current flat to buy their new home. The extension request must be submitted to the HDB along with the resale application.

By then, the seller must also have already committed to buying a completed home, public or private.

The exact arrangements, such as the duration of extension and any monetary compensation, are privately negotiated and agreed upon between sellers and buyers.

Said the HDB: "If the sellers vacate the flat earlier than the three- month period, the buyers (new owners) need only to update HDB accordingly."

"As agents, we used to try to time sales such that sellers would have a place to go to when they move out. Or we'd suggest that they move in with a relative and put their furniture in storage while waiting for their new flat to be ready," he said.