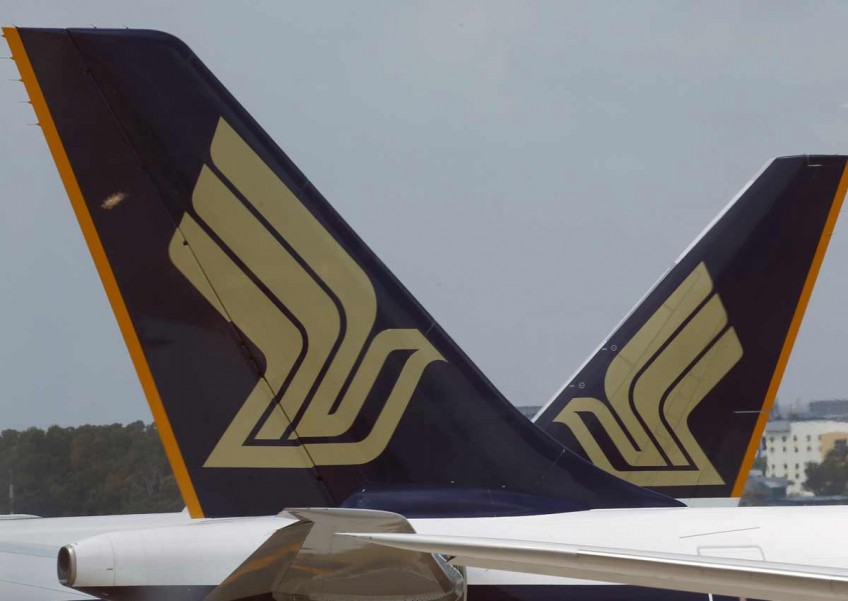 Singapore-based airlines will have to comply with two new safety requirements that are expected to be in place in less than five years.
Reuters

Singapore-based airlines will have to comply with two new safety requirements that are expected to be in place in less than five years. Both rules aim to avoid a recurrence of what happened to Malaysian Airlines Flight 370 more than two years ago.

The first is that local carriers have to implement means to "recover flight recorder data in a timely manner", a Civil Aviation Authority of Singapore (CAAS) spokeswoman said in a response to BT queries.

The second requires them to equip planes with a "distress tracking system to autonomously transmit position information at least once every minute when in distress".

CAAS is working towards implementing them by Jan 1, 2021 "or earlier", said the spokeswoman.

All three are part of a global regulatory push aimed at avoiding a repeat of the MH370 tragedy. The aircraft disappeared more than two years ago and has yet to be found. Search operations for the missing plane are expected to end next month.

CAAS's moves are in line with those first put forth by the United Nations' International Civil Aviation Organisation (ICAO) in 2015, when it unveiled a blueprint called Global Aeronautical Distress and Safety System (GADSS) to strengthen agencies' responses during emergencies.

It fleshed out ideas for normal and distress tracking of planes, especially when they travel over oceans.

Distress tracking is when air traffic controllers receive information of a plane's location at an interval of at least once a minute versus once every 15 minutes for normal tracking.

Such initiatives are viewed by the industry as crucial in preventing delays in search-and-rescue operations when flight mishaps occur.

Flight MH370's final moments and the aircraft's exact whereabouts are still unknown - more than two years after the plane vanished on March 8, 2014. Search operations are expected to end in August, throwing investigations into one of modern aviation's biggest mysteries into limbo.

The problem is that locating and retrieving flight data recorders from an ocean crash can be a difficult and lengthy affair. For example, those from Air France Flight 447, which crashed into the Atlantic Ocean on June 1, 2009 were retrieved only two years later.

"Very accurate information must be provided in a timely manner and to the right people to support search and rescue, recovery, and accident investigation activities," said satellite communications firm Blue Sky Network in a report on the GADSS initiative.

There is thus a need to ensure that the global aviation industry can get up to speed with the pace of change, said Mary McMillan, vice-president of aviation safety and operational services at Inmarsat, in an interview with BT. The satellite communications company helped narrow down the search area for MH370 and is in talks with ICAO to determine requirements for distress tracking and flight data streaming, said Captain McMillan.

"Technology has improved greatly since MH370, or even since AF447. We need regulators to push for this so that we can put more and more airplanes into the skies safely," she said.

Local regulators thus play a crucial role in ensuring that the industry is kept up to speed, as airlines are often preoccupied with day-to-day problems, said Con Korfiatis, partner in Heidrick & Struggles, whose expertise is in the aviation industry.

"ICAO can't drive local policing and dictate what each carrier does. So local regulators have an important role to play to roll out these initiatives," he said.

While all local air operators satisfied the 15-minute normal tracking requirement for their ground capabilities by July 1, just under 3 per cent of Singapore-registered aircraft are still not equipped with such systems, said the CAAS spokeswoman.

"CAAS is working with the air operators to ensure that the remaining aircraft are scheduled for upgrading as soon as possible. In the interim, continued operations of these aircraft have been allowed as mitigation measures have been put in place," she said.

Low-cost carriers are understood to have had to make significant investments to comply with this regulation. This is because they have more single-aisle planes, which might not have the necessary equipment and technology.

Jetstar Asia and Tigerair have told BT that they have aircraft tracking systems in place, with Jetstar Asia's spokesman saying it is "being progressively rolled out to each of our A320 aircraft".

National carrier Singapore Airlines is already making investments in this area, and also in others to meet ICAO's requirements.

A spokesman told BT that it is in the midst of upgrading the battery life of underwater locator beacons from 30 days to 90 days.

As for distress tracking, it is awaiting further details from ICAO before making investments in this area.

"Singapore Airlines is supportive of the efforts to improve flight-tracking capabilities as they will improve overall flight safety and security," said the spokesman.

This article was first published on July 07, 2016.
Get The Business Times for more stories.