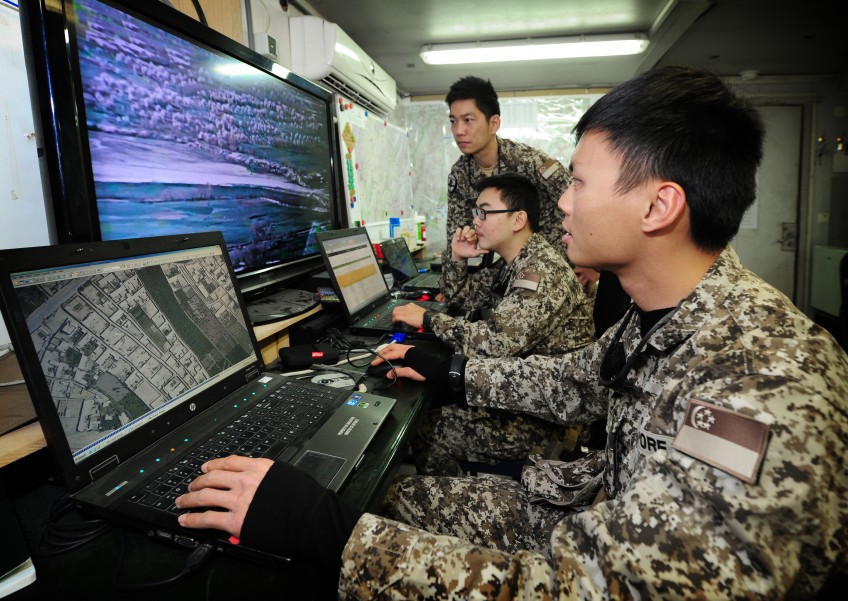 Members of the Singapore Imagery Analysis Team at a multinational base in Afghanistan in 2014. The team has provided useful intelligence support to the multinational coalition fighting ISIS at its headquarters in Kuwait.
Mindef

The Singapore Armed Forces (SAF) will continue to send military personnel this year to support the multinational coalition battling the Islamic State in Iraq and Syria (ISIS), as the threat posed by the militant group persists.

The coalition forces had asked for the team, whom they found useful as their first imagery analysis capability at the Kuwait headquarters, said Dr Ng.

Another reason the SAF is continuing its deployments is that ISIS is a long-term terrorism threat, he said. "By contributing to the international effort to tackle the threat at source, we are contributing directly to our own safety."

Dr Ng was replying to Mr Alex Yam (Marsiling-Yew Tee GRC), who asked how effective a role SAF played in the anti-ISIS coalition and whether Singapore's involvement will be expanded.

The defence minister said that as the fight evolves, Singapore will assess regularly the relevance and effectiveness of its contributions.

It will also work with partners to see how best Singapore can contribute in ways "that are within our means and capabilities".

Singapore was the first South-east Asian nation to join the international fight against ISIS, sending a liaison officer to the United States Central Command Headquarters in December 2014. The SAF had also sent an intelligence planner to Kuwait in January last year.

It also supported air-to-air refuelling with its KC-135 tanker aircraft from last May to August, during which the plane flew 52 sorties and refuelled 142 coalition aircraft.

Many countries, including Malaysia, have also joined the coalition, Dr Ng said, as they recognise that citizens at home cannot be protected "unless the source of this radicalisation is disrupted".

In his reply to Dr Fatimah Lateef (Marine Parade GRC), he cited the Singapore Muslim Identity project set up by the Islamic Religious Council of Singapore (Muis). It lays out the desired characteristics of Muslim religious life in multiracial and multi-religious Singapore.

If the practices and ideologies of any group are found to be "fundamentally errant", Muis will issue a fatwa to pronounce what it finds objectionable and provide guidance to the Muslim community.

"There is no place for exclusivist and extremist doctrines," he added.

Home Affairs and Law Minister K. Shanmugam said religious groups and foreign preachers who promote teachings that threaten the social fabric have no place in Singapore.

"Freedom of religion is guaranteed under our Constitution. But any religious group... that preaches values or promotes actions that are directly contrary to our social harmony, or threatens our safety, will be treated as a security risk," he said in his reply to Mr Yam. "The protocol is a very straightforward and transparent one... If his (preacher's) teachings are contrary to our values, he will be denied entry."