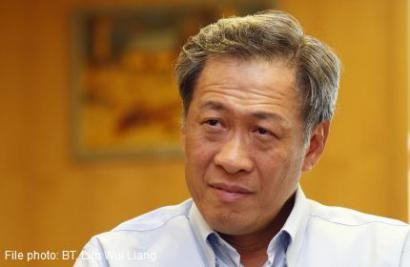 Defence Minister Ng Eng Hen said a committee he heads "will seriously consider the suggestions to allow volunteers to play a bigger role in our defence".

SINGAPORE - Defence Minister Ng Eng Hen yesterday indicated on Thursday that the Singapore Armed Forces (SAF) may expand its volunteer programme to allow more Singaporeans, including women, to do more for the country's defence.

He said a committee he heads "will seriously consider the suggestions to allow volunteers to play a bigger role in our defence".

One suggestion that has been made is to expand the SAF volunteer scheme to include those who are not liable for national service, like women.

Other suggestions include making military-related jobs available to volunteers, added Dr Ng, who heads the high-level Committee to Strengthen National Service, whose goal is to increase support for and commitment to NS.

He noted that there has been a growing chorus from people asking the SAF to offer more opportunities for Singaporeans, including women, to "participate actively in Singapore's defence".

"I think this is a positive step and it is something that we should respond to," he said at a dinner to recognise the efforts of more than 140 volunteers. They volunteered their services in 39 panels that advise Mindef or the SAF in areas like law and music.

Paying tribute to their "selfless service", he said they are "outside the system" and their objective inputs to help the SAF get things right have boosted public confidence.

The expected expansion of the SAF volunteer scheme and its details are likely to be among the findings to be announced next week on how to beef up support for NS. These findings stem from feedback received from more than 10 focus group discussions held in the last two months.

The topic of women in NS attracted intense discussion during these sessions, including an all- women focus group last month. Some favour shorter stints or duties that involve administrative, logistics or nursing roles.

Women who want to volunteer for NS but do not want to be career soldiers already have opportunities to volunteer in the SAF. They can join the SAF volunteer scheme by approaching the military to offer their services. The programme is open to any Singaporean when they turn 17.

The men volunteers are often former regulars or who have completed their NS obligations. Many are given administrative roles.

Marketing manager Jamie Seet, 53, who has two daughters and a son, said more women volunteers will help "females better understand why it is important to defend the country and not just leave it to the men".

Architect Johnny Tan, 59, who volunteered to help build and develop the Safra clubhouses, said his decision in the late 1990s was fuelled by passion: "The belief in a cause that is worthy... which makes volunteering more satisfying."