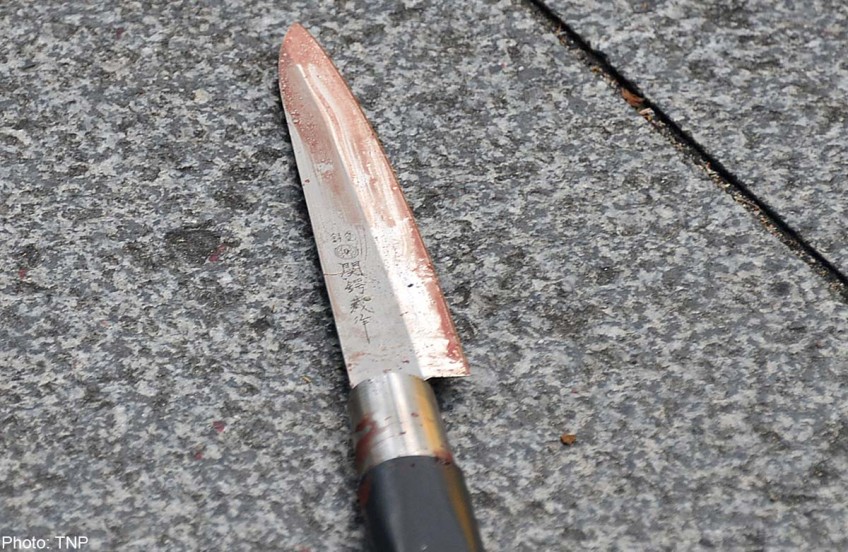 A jobless man who went to his neighbour's house and slashed him with a small samurai sword because of a debt was jailed for 10 years yesterday.

Abdul Rahman Ibrahim pleaded guilty last September to trespassing on the home of Mr Yun Yew Lee, 41, and injuring him on his forearm and lower back on June 6 last year.

He also pleaded guilty to one of two drug consumption charges after taking morphine last November.

The court heard that Abdul Rahman had been on good terms with Mr Yun until their relationship soured over a partially returned debt.

At about 4pm on June 6, he took a samurai sword with a 32cm blade and a chopper from his Commonwealth Crescent flat and entered Mr Yun's unit.

He felt he had been offended by the victim and decided to "settle it" with him.

Mr Yun was lying on a mattress in his living room and talking to his 12-year-old nephew when Abdul Rahman appeared and slashed him on his left forearm.

When the victim tried to turn away from him, he was slashed again.

Abdul Rahman stopped and left when Mr Yun's brother came out of a room.

An arrest warrant was issued after Abdul Rahman absconded from court on Nov 14, when he was to be sentenced.

He was arrested at his home on Nov 25 for suspected drug consumption. His urine sample tested positive for morphine.

In 2002, he had been sentenced to nine years' preventive detention on drug-related offences, and was therefore liable for enhanced punishment of seven to 13 years for taking morphine.

Abdul Rahman pleaded for another chance and promised not to reoffend, but the judge said: "Your promise rings quite hollow, especially in the light of your absconding."