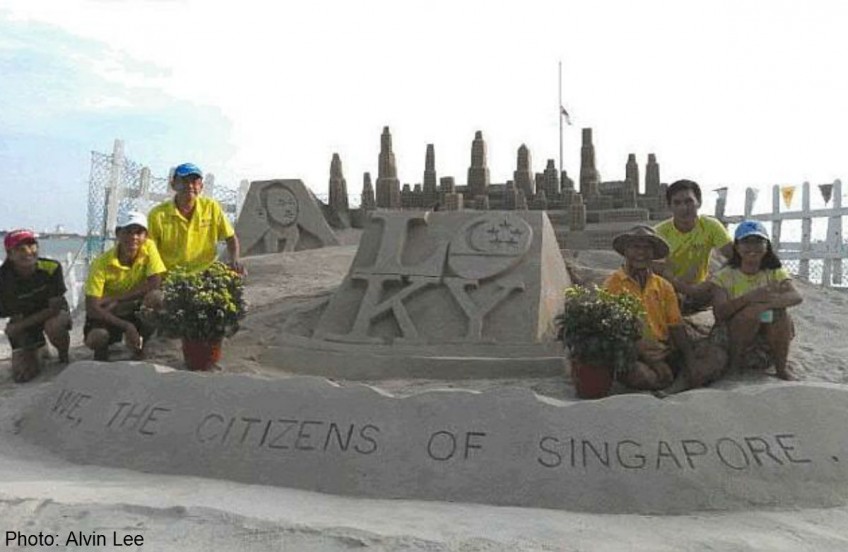 SINGAPORE- While many stood in line for hours to pay their last respects to Mr Lee Kuan Yew at the Parliament House on Wednesday, a group of volunteers was working in the sand to pay tribute to Mr Lee in a different way.

Over eight hours, with the help of nine others, sand sculptor Alvin Lee created a sculpture which they hope would embody the spirit of Singapore's founding father.

The sand sculpture, standing at 3m tall and 5m wide, depicts the Singapore skyline, a likeness of Mr Lee Kuan Yew, and part of the national pledge.

Mr Lee, 58, a corporate trainer, told The Straits Times that other than the scorching heat of the day, the biggest challenge was deciding what exactly to include in the sculpture. "The challenge was trying to depict a multi-faceted person. He's very colourful, and even controversial. Everyone had an opinion."

Mr Lee and his team are all self-taught sand artists, he said. He added that rain or shine, the sculpture, made of "sand, water and lots of hard work", should last for two to three weeks.

The sculpture can be found on the beach at East Coast Park near Carpark E2 and the cable ski lagoon.