Schools closed, but some students still turn up 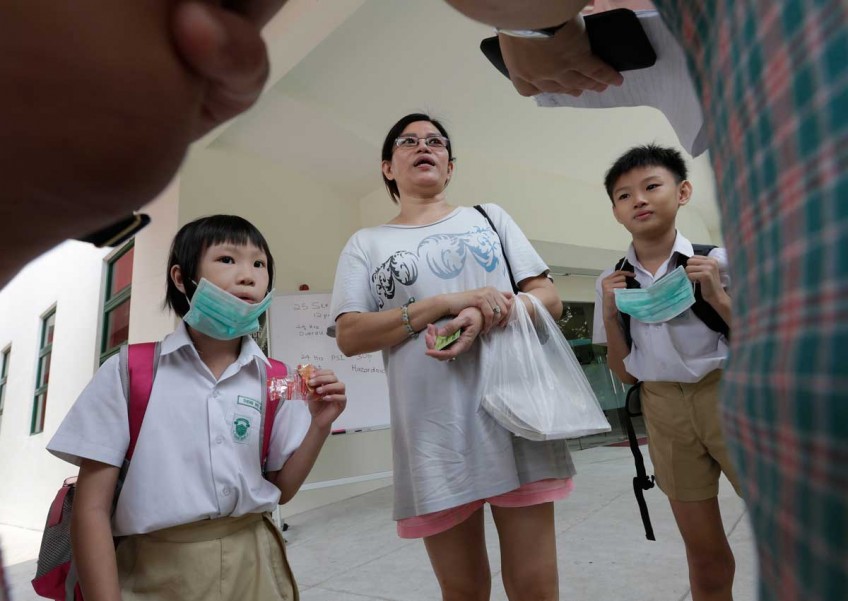 Housewife Lee Peng, 50, picking up her children Theng Wei Ern (at left), nine, and Theng Wei Zher, 10, from De La Salle School yesterday. The children were among the more than 20 pupils who showed up at the school yesterday. Some went to school so that they could revise for their exams.
The Straits Times

Schools were shut but small pockets of students still showed up yesterday, because their parents could not make alternative care arrangements for them.

The Ministry of Education (MOE), in an unprecedented move, had decided the night before to close schools as Pollutant Standards Index (PSI) levels crossed into the very unhealthy range.

The late announcement, which came at 9pm, caught some parents by surprise. They could not make arrangements for someone to care for their children. A handful were unaware of the closure altogether.

At Si Ling Primary School, 13 pupils showed up, said principal Richard Lim: "I told their parents, 'Good, we can take care of them'."

The school prepared educational games and catered food for the pupils, who stayed in the air-conditioned library.

Blangah Rise Primary School principal Matthew Ou said his school sent out circulars to parents a few weeks ago to inform them about unhealthy haze conditions.

Fifteen pupils turned up yesterday at the school's student care centre, which continued to provide supervised care within the primary school's premises.

"We have been watching the situation very closely and we want to make sure that our pupils' learning needs are taken care of," said Mr Ou. His school has rolled out e-learning packages, which include worksheets and learning videos. Teachers and pupils are able to keep in touch through the school portal.

At Kong Hwa School, at least seven pupils were dropped off.

Mr Chia Keng Ho, 54, who found out about the closure through the Internet, took his granddaughter Hu Shu Han, eight, to school because his flat was being renovated.

Over at Queenstown Primary School, one pupil showed up to revise for the Primary School Leaving Examination (PSLE) next week. "My son's friend had called to say that he could still go to school if he wanted to, so I was hoping that there would be some (PSLE) practice for him," said 43-year-old housewife Raquel Mahendran.

PSLE pupil Abhiramarooban Katherasn, 12, from De La Salle School was among the more than 20 pupils who showed up at school yesterday.

Both his parents were working and he wanted to get some revision done for his upcoming exams. "When my parents are not at home, I tend to do a lot of things like watch TV or play computer games. So to get away from all that, I came to school today to study," he said.

While polytechnic and Institute of Technical Education students are now on their term break, the schools also activated their haze management plans, which include the suspension of all outdoor activities.

Self-help groups Chinese Development Assistance Council (CDAC) and Mendaki also cancelled tuition classes for yesterday and today. CDAC said it will continue to monitor the haze situation and will provide updates on its Facebook page.

Mendaki said it has provided supplementary materials such as mock-exam papers on its website and Facebook page for students who want to continue their examination preparations.