Being stranded for more than 24 hours in a city because of a technical problems with the plane can be exasperating for most travellers.

But not getting accommodation or food can be a more agonising experience, especially for a hungry and tired traveller in a strange land after waiting out for hours.

And just when you thought you would finally be taking off after the trying experiences of the previous day, there's yet another delay - and another.

This is just what passengers booked on Scoot flight TR1 had to suffer in Sydney over the weekend.

After waiting to board the Singapore-bound plane at 12.30pm on Saturday (Sept 30), the 234 passengers had to wait for another one hour in the first delay. Another three hours later, they were told the flight was cancelled and had to be rescheduled to 8am the next day.

Passengers were told overnight accommodation would be provided, especially for those who were not Sydney residents.

The next morning would probably pan out fine, but alas, it was not to be. Instead of flying off at 8am, the passengers were told there's another delay of one and a half hours.

When the plane finally taxied out to get ready for take-off at 11am, it had to turn back because of technical problems.

It only managed to take off two and a half hours later at 1.30pm. Finally.

But it was the poor communication, accommodation, and transport issues of the previous day that infuriated passengers.

They were appalled they were not contacted at all by Scoot staff during their ordeal. Calls to the 24-hour helpline and appeals to the Scoot Facebook page either went unanswered, or were attended to with unsatisfactory replies.

Although 53 of the travellers accepted Scoot's offer of hotel accommodation, there were complaints of lack of rooms and missing transport.

One Facebook post described how a group of 40 passengers did not manage to get accommodation and were left stranded in the airport with no food and drink simply because they were at the back of the queue. What's worst, the eateries at the airport had closed.

NO FOOD FOR 12 HOURS

Dissapointed passenger Chai Yieng said she and some other passengers had to "spend a night in the airport" after a shuttle that was supposed to take them to the hotel did not come.

"Our group had a mother and kid, and a elderly couple, waiting in the cold night till 10-11.30pm for a shuttle which never reached...We were frantic and disappointed to all these, after being stranded and (sic) starving for more than 12 hours. All of us just had to spend a night in the airport. Could there be a better arrangement to ensure all passengers have been picked up? We all felt deceived," she wrote.

A Scoot spokesman said the most of the passengers were either Sydney residents or did not require their assistance.

But passenger David Harris wrote on Facebook that those who needed accommodation waited for three hours before the line stopped "abruptly" because officials were "waiting on confirmation for more accommodation".

Normally not a big reviewer but I'll make an exception for Scoot. Arrived at Sydney airport, flight was delayed 5 hours...

NO ROOM AT THE INN

Another passenger Jeremy Teo had a more harrowing experience. He wrote on Facebook that his family was sent to Novotel Sydney Central for nothing. They spent three hours there waiting for a room only to be told there was no room available.

Past midnight, they were told to go to an airport motel where they found no one was working and no room was available there. Then it was back to Novotel at 1am, with his baby "crying incessantly".

He was mad enough to post his experience on the Facebook page of Singapore Airlines, reprimanding the parent company of Scoot: "Just because Scoot is the budget arm you can treat your customer like dirt?"

Another passenger, grandmother Myrene Hooper, and her children were disgusted by the airline's refusal to serve free food and drinks as a gesture of goodwill especially to children after the epic delay and botched crisis management.

So my 2 adult children and 2 grandkids were excitedly looking forward to landing yesterday evening here in Singapore on...

SCOOT IN A TIGHT SPOT BECAUSE OF PEAK SEASON

According to Channel NewsAsia, Scoot's spokesperson said the airline tried to arrange transport and hotel rooms for passengers that required overnight accommodation, but due to it being a holiday season, there were "limited options".

"We sincerely apologise for the inconvenience experienced due to the delay in ground transportation to the hotels, and miscommunication between our airline representatives and the hotels which resulted in some unavailability of rooms," the spokesperson said.

"We regret the disruptions to the travel plans of our passengers."

"Safety is of utmost importance to Scoot, and we will spare no effort in making sure all our flights operate safely," the spokesperson added.

Ironically, an ill-timed report on the improved services of the budget air industry on Channel NewsAsia on Sunday afternoon featured Scoot CEO as saying: "It's no longer the bad old budget airlines of the past, leaving you stranded."

“It’s no longer the bad old budget airlines of the past, leaving you stranded. We all take care of our customers": FlyScoot's CEO says the industry has come a long way in terms of service. 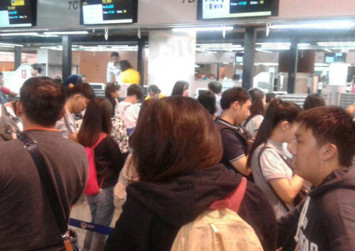