A sea of treats for family at Resorts World Sentosa 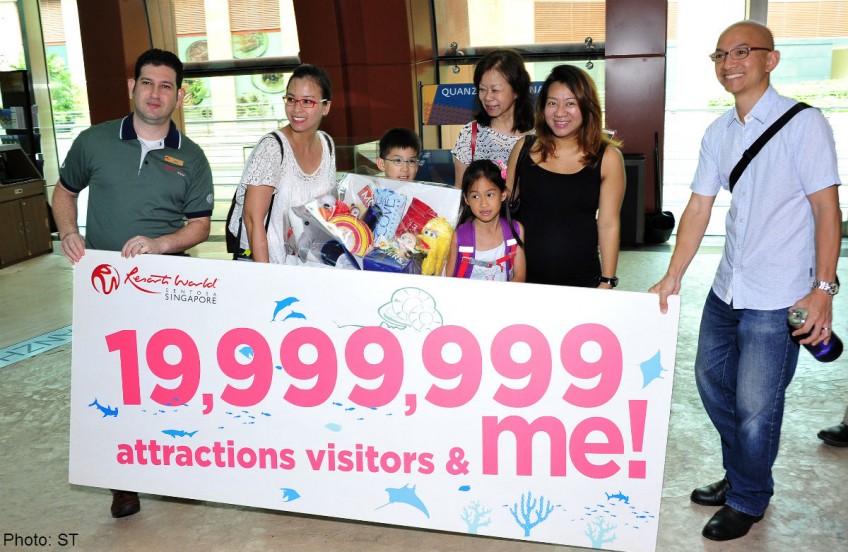 SINGAPORE - A regular excursion for Mr Isaac Leong and his family turned into an extra special one yesterday, when the estate planner became the 20 millionth visitor to Resorts World Sentosa's (RWS) ticketed attractions.

Mr Leong, his wife, mother-in-law, sister-in-law and two children were greeted with applause and a $1,500 gift hamper when they entered the integrated resort's S.E.A. Aquarium for the first time.

"It's a pretty pleasant shock," said the 38-year-old, whose family was there partly to celebrate the birthday of his mother-in-law, Madam Colleen Soh, who turns 64 today. "We're very touched and thankful."

His wife, Ms Geraldine Heng, a 36-year-old housewife who home-schools their nine-year- old son and seven-year-old daughter, added: "My son has been pestering us to come ever since my mother showed him photos of sharks she took in Sydney."

Staring at the scalloped hammerhead and grey reef sharks swimming around him, the couple's son Josiah said: "It's cooler in real life."

As part of the hamper, the family received souvenirs, four annual passes and a VIP tour of the attraction, which included a visit to the aquarium's jellyfish breeding lab.

The aquarium, which opened in November 2012, is one of three ticketed attractions at RWS, alongside the Adventure Cove Waterpark and Universal Studios Singapore. It will launch themed conservation months, starting with one centred on sharks next month.

Activities will include performances by Ms Cristina Zenato, a "shark whisperer" based in the Bahamas, and the introduction of a new programme that will allow visitors to swim alongside the creatures.

Vice-president of attractions at RWS Jason Horkin said: "It's not dangerous. Sharks typically don't attack people. Visitors will also have multiple safety divers with them."