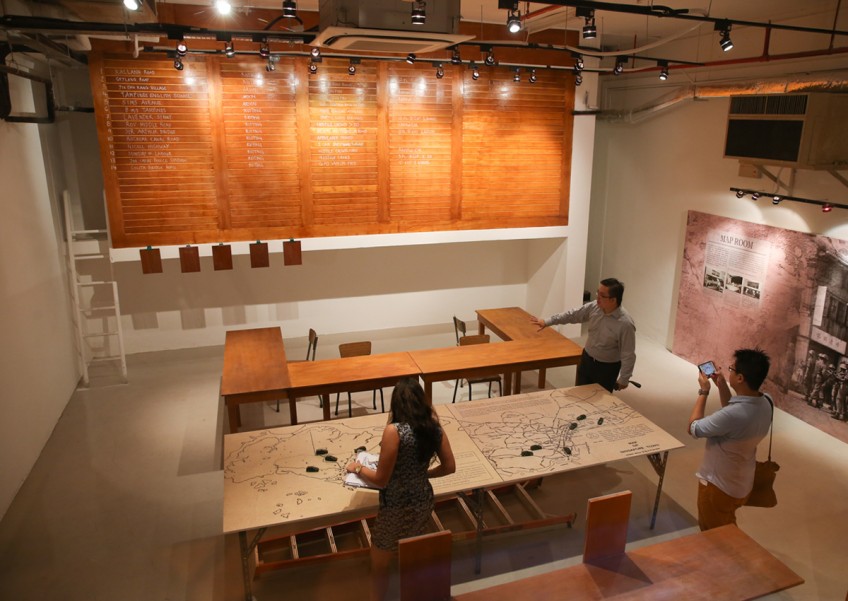 This is the view overlooking the map room, where staff members updated incidents across the island on a tote board and map in real time.
The Straits Times

ON PEARL'S Hill Terrace in the heart of Chinatown, amid housing board flats and the People's Park Complex, lies a secret.

Herein lies a former police bunker where all 999 calls in Singapore were once answered and where the police managed operations to deal with security threats like the 1956 Chinese middle school riots.

Called the Combined Operations Room, it served as the nerve centre for police communications from 1956 to 1988.

Now, for the first time, the British-built bomb proof facility will be buried in secret no more and will be open to the public starting today for three months.

The public will be able to sign up for tours of the place, as a result of a joint effort by the Ministry of Home Affairs, the National Heritage Board and the Singapore Police Force.

Visitors can view the Home Team's SG50 exhibition and walk through eight refurbished rooms recreated according to what the bunker had been like when it was operational.

The rooms include the Chief Police Staff Officer's room, which has a large glass window overlooking another room where staff put up updates about incidents across the island on a tote board and map in real time.

A saucer shaped multi-sided podium was also recreated for what used to be the Radio Control Room. Phone operators known as the "Triple 9 Girls", received all emergency calls and dispatched police assistance from this podium.

The 999 calls are now picked up from the Police Operations Command Centre at New Phoenix Park.