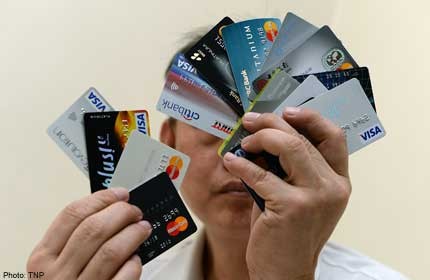 Mr T.L. Tan and some of his credit cards.

SINGAPORE - He is mildly mentally disabled and works as a security guard, earning $1,700 a month.

Mr Tan's family said that he was duped by another man who set up a company in his name and declared a huge income to the Inland Revenue Authority of Singapore (Iras).

He got Mr Tan, 51, to apply to banks for the cards and then used up the credit limit.

His older sister, who wanted to be known as Madam Tan, discovered her brother's situation in 2011 when he wanted to borrow money for an investment.

About six years ago, Mr Tan met a man who was a regular at a warehouse in Balestier where he worked. After several meetings, he claimed the man asked him if he wanted to set up a company.

Mr Tan agreed, handing his personal documents to him. The company was registered in Mr Tan's name and the man allegedly signed up for credit cards bearing Mr Tan's name.

Checks with the Accounting and Corporate Regulatory Authority (Acra) showed that Mr Tan was listed as sole proprietor of a company, G8Biz Trading & Consultancy, from 2006 to 2012.

The company deals in raw and bullion gold, according to Acra.

Iras records showed that Mr Tan declared a total income of more than $145,000 in 2012, which allowed him to apply for the credit cards.

When The New Paper visited Mr Tan at his spartan four-room flat, he struggled to explain his predicament.

"I would call the bank (linked to the credit card) and tell them I wanted to borrow money. (The man) would call me to meet at my workplace and we would go to a POSB ATM to transfer the money to his account," he said, speaking in halting sentences in Mandarin.

Mr Tan also showed TNP an SMS that had the account number of the man. He also claimed that he has never received any money from the man.

Mr Tan, who is married but has no children, let his sister, Madam Tan, do most of the talking during the interview.

Madam Tan, who used to work in a bank, has apparently been trying to cancel his cards over the phone and by fax since 2011. But all the banks refused to do so, except for the Bank of China.

One bank officer told TNP that another person cannot cancel the card on someone's behalf and that one should go down personally in situations like this.

Madam Tan approached his MP for help, but even that was unsuccessful.

TNP saw one reply from a bank which said: "The Bank has investigated the matter and is satisfied that the loan was for Mr Tan's own business purposes and there is no impropriety involved."

The man who allegedly duped Mr Tan apparently paid the minimum required sum every month so as to continue enjoying the banks' credit facilities.

Now Mr Tan's bank account, where his salary is deposited every month, has been frozen.

When TNP called the man's mobile phone, he claimed to be busy and eventually said he wasn't the person we wanted. This was despite earlier confirming his identity.

Madam Tan added that the police had acknowledged their reports and would not be investigating further.

Banks should be more concerned: Lawyer

According to the letters from banks that were sent to his house, Mr Tan's credit limit ranged from $4,000 to $57,500 for each of them.

Credit Bureau Singapore (CBS), which collates personal credit histories to help financial institutions assess individuals before they give out a loan, also declined to comment.

According to the CBS website, different credit providers may use information (from an individual's credit report) differently or take into account other factors when they assess loan application.

Lawyer T. U. Naidu, who has represented individuals with low IQ, said that the root problem is that while Mr Tan was entitled to apply for the credit cards, he does not necessarily understand the consequences of applying for them.

"Banks are fast in lending money. But if Mr Tan doesn't understand the contract (signing up for a credit card), it may be voided.

"Banks should be more concerned about who they are issuing their cards to."

But consultant psychiatrist Brian Yeo, who has been called to court to assess the mental state of individuals, said that Mr Tan's low IQ can be a mitigating factor, but he will still be liable.

"A person with low IQ is more easily taken advantage of. Why would a normal person believe that money can come by so easily?

"But it's also important to show that his actions corresponds with his thoughts, or in this case, lack of.

"For instance, why was he secretive and why did he not tell his family about the company or the money?"

Mr Naidu added that Mr Tan may be declared a bankrupt and credit cards can no longer be issued to him.

Mr Tan will be going for credit counselling this month to explore his options.

Ms Tan Huey Min, spokesman for Credit Counselling Singapore, said that if he is found to be suitable, he can opt for the debt management programme with it to work out a proposal to be submitted to his creditors.