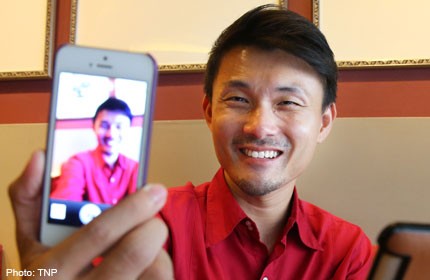 SINGAPORE - What are those pictures, you may ask.

And that man in them is Tampines GRC Member of Parliament Baey Yam Keng.

His numerous selfies can be found on the Net because for the past eight months, he has been religiously updating his Instagram account - a photo-sharing social media platform - with pictures that offer the public a glimpse into his personal life.

This includes photos of the food he eats and events he attends.

Along with these pictures are captions that explain what he is doing or wearing.

What started out as an experiment eventually generated so much buzz online that a blogger termed him a "selfie crush" - someone you have a crush on because of his or her flattering selfies.

The blogger even singled out 10 of Mr Baey's selfies, calling them the "hottest" of the lot. The MP has posted more than 350 photos.

He learnt about the various social media platforms through conversations with young people.

"I'm curious about all these things and adventurous enough to try," he said.

The MP recalled the thoughts that went behind his first selfie posted on Instagram.

"You know, taking a selfie is a trend on Instagram, right? But I was also a little apprehensive. I wasn't sure how the public would react to it. So I thought, maybe not my full face. I'll give it a try first.

"It was okay, no averse reactions. So I got a bit bolder and more comfortable doing so."

It took him two to three shots before he finally posted his selfie up.

"The thing about Instagram is that everything will look nice," he said with a laugh.

"I don't think all photos are flattering, but it's not a bother. It doesn't need to have the best shot. As long as it depicts the moment.

There's always a caption to explain and sometimes there's a particular message I want to convey.

"So I hope people will not just look at the photo, but also read the caption," he said.

His Instagram photos have also helped him relate better to people, especially the young who are users of social media. It shows that MPs are also human, he said.

"Sometimes, the impression of MPs is that they only dine at restaurants. So, I don't know, I think it does bring us closer. I hope so," he said.

But he does not post pictures of his family.

"They are not public figures. I don't want undue attention on them. It's also not to give them pressure," he said.

Reactions to his posts have been "more positive than negative", he said.

His peers have been supportive.

But Mr Baey has also received some flak for his selfies.

Netizen Barrie called him "the most narcissistic MP Singapore has ever had in history".

"Baey Yam Keng talks as if he's some celebrity. Like movie star or singer. He's more interested in others being interested in his selfies than for his work as an MP (sic)," the netizen wrote.

Netizen SingaporeSpirt called him "a man in need of public attention" and "lacking in self confidence".

Of course, there will always be criticism, Mr Baey said.

With a look of resignation, he said: "I'm used to it. It happens on Facebook as well. All along, I've been telling myself that we can't make everyone happy. As long as we are sure of ourselves, we do it with the right motives. That's the most important thing to me."

Social media experts TNP spoke to said that while social media is a good way to connect with people on the ground, it can be a double-edged sword.

Social media consultant Belinda Ang said "I think as long as the content of these pictures are appropriate, and does more to spread positive messages than negative ones, it should not be an issue."

But she warned of the nature of social media, which gives room for words to be twisted and meanings to be misconstrued, as "one man's meat is another man's poison".