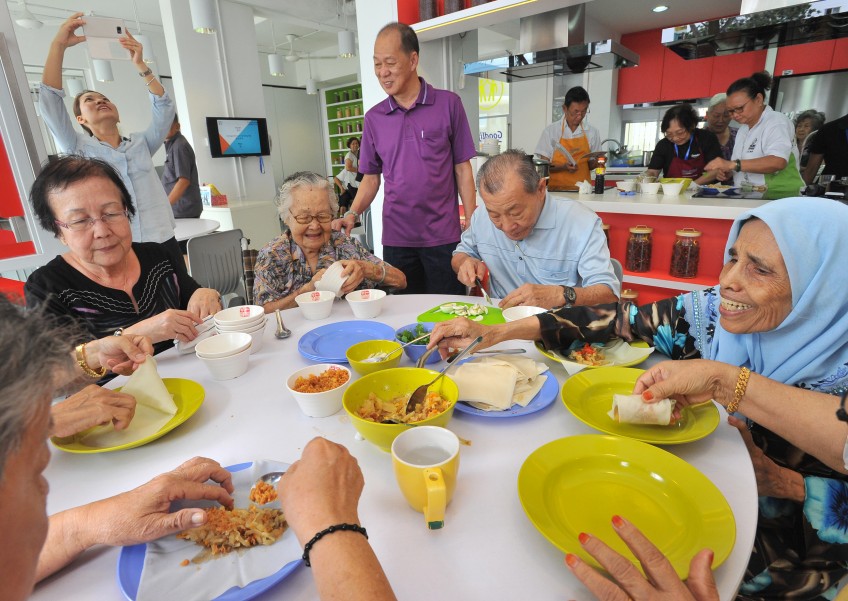 Something is brewing in a corner of Marine Parade.

The usually empty void deck at one block of flats is often filled these days with old folk busy chopping vegetables or peering over bubbling pots on sleek kitchen tops.

On Wednesday, the lunch item of the day was popiah. Some elderly residents came down from their rental flats at about 9.30am to help slice turnips and carrots, and pluck the tail ends of bean sprouts. Others helped keep an eye on the soup stock.

This cosy communal cooking scene has been playing out every morning for the last three months at Block 52, Marine Terrace.

The open-concept kitchen project is the first of its kind here.

"With the ramping up of various meal, home help or befriending services that deliver food or services to the doorsteps of the elderly, we observed that some of them have become overly cocooned in their flats," said Mr Samuel Ng, chief executive officer of Montfort Care, a network of programmes.

"Such efforts can unintentionally breed a mindset of dependency and entitlement," he added.

Instead of starting another meal delivery service or a volunteer-run soup kitchen, Monfort Care social workers told the 92 seniors living alone in the area: If you want a free meal, go downstairs and cook it yourself with your neighbours.

Mr Ng said: "By doing this, they see themselves as participants and contributors instead of just being recipients or having the social stigma of being labelled as 'stay-alone seniors'." This also gives them the chance to interact and build social networks, he added.

To keep the kitchen informal and organic, only two or three staff members are present to help the 40 to 50 seniors who gather at the GoodLife! Makan kitchen every morning. The seniors decide among themselves who goes shopping at the nearby market and what is for lunch.

Some go earlier to prepare the ingredients and cook, while others arrive slightly later to clean up.

Madam Ing Ah Tay, 93, has been receiving packed food at her house from her neighbour and the Residents' Committee since she had a fall two years ago and became confined to a wheelchair.

"I used to be quite independent but things changed after my fall and I stayed at home mostly," said the former laundrywoman in Hokkien.

Now, she looks forward to helping out in the kitchen and meeting her friends there.

Socially isolated elderly men who do not usually join community activities are also turning up at the kitchen.

Retired petrol kiosk attendant Ku Thien Wee, 77, said: " Usually, I don't join in much because I am not interested but cooking is more hands on and allows me to make many auntie friends."

The Tote Board provided an estimated $300,000 a year for the project, administered by the Agency for Integrated Care.

The 160 sq m kitchen, which will be officially launched by Emeritus Senior Minister Goh Chok Tong tomorrow, has eight stoves and a separate cooking area for Muslims.

Madam Hindon Abdul Hafidz, 83, said: "I take my 70-year-old recipe book to share my secrets and, so far, the most popular items are the assam pedas fish and chicken curry."