Sentosa trip is one in 20 million for Leong family 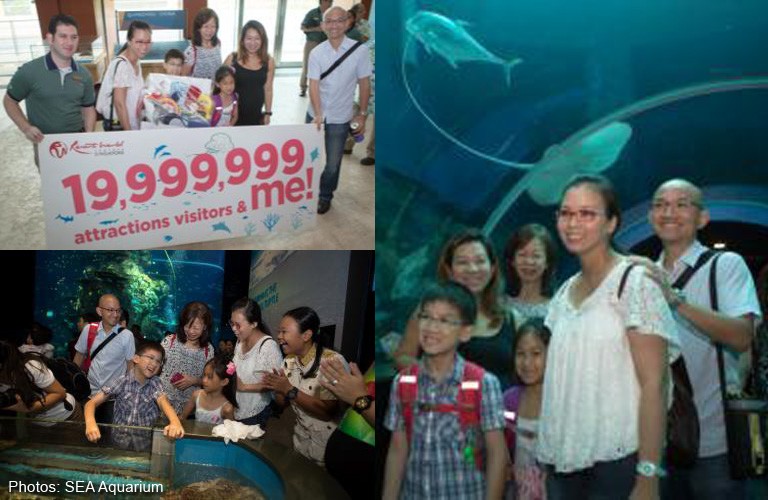 SINGAPORE - What was meant to be a regular excursion for Mr Isaac Leong and his family turned into an extra special one when the estate planner found out that he was the 20 millionth visitor to Resorts World Sentosa's gated attractions on Thursday.

SINGAPORE, 17 JULY 2014 - Resorts World Sentosa's S.E.A. Aquarium will soon launch themed conservation month, aimed at raising awareness on different marine species. The S.E.A.A. Wonders programming will kick off with sharks in August, headlined by Ms Cristina Zenato, well known for being a 'Shark Whisperer' with her ability to calm sharks and induce tonic immobility. This and other new offerings were announced today as the integrated resort crossed another milestone, welcoming 20th million visitors through its gated attractions.

Passing through the doors of S.E.A. Aquarium, Mr Isaac Leong, 38, an estate planner, was welcomed as the 20th million visitor this morning with his extended family. The family not only won a gift hamper and annual passes to S.E.A. Aquarium, they also got an exclusive behind-the-scenes tour at one of the world's largest aquarium.

"This was definitely a pleasant surprise for us. We have heard so much about S.E.A. Aquarium and have been planning for a family outing to visit with our kids. It was most enriching to learn so much from the passionate staff during the tour, and I can't wait for the new exhibits and offerings. And with the annual passes now, my family and I will definitely be coming back a lot more," said Mr Leong.

Coming up over the National Day weekend, Ms Cristina Zenato will be making special appearances at S.E.A. Aquarium three times daily on 8th and 9th August, promoting shark conservation through up-close interactions. Other activities lined up for August include storytelling during the weekends as well as a Shark Adventure Trail for children with exciting lucky draw prizes to be won each week. The Aquarium will also be introducing new species including a walking epaulet shark in August. In the near future, visitors can also look forward to expansion of the Aquarium's popular offerings such as the Discovery Touch Pool, as well as a new shark dive programme.

Mr Jason Horkin, Vice President of Attractions at Resorts World Sentosa, said: "We couldn't have achieved this milestone without the support of our visitors from Singapore and the region. We will continue to refresh both hardware and heartware to enhance our visitors' experience, while maintaining world class standards across all our attractions here at Resorts World Sentosa."

In June, the Marine Life Park (MLP) became an accredited member of the World Association of Zoos and Aquariums (WAZA), recognising its role in promoting conservation and public education. The membership places Marine Life Park under the same umbrella association with leading zoos and aquariums around the world. This membership will help the park foster greater collaboration, and put Singapore on the world map in marine conservation, education and research.

MLP's Adventure Cove Waterpark also became the first in Southeast Asia to attain the Silver International Aquatic Safety Award by Ellis & Associates, putting it among the top 30 per cent of water parks worldwide.

Over at Universal Studios Singapore, the popular Sesame Street stage show - When I Grow Up - will be revamped and staged at inside Pantages Hollywood Theater starting 20th September. Thrill seekers will soon face their greatest fears once again at Universal Studios Singapore's signature event - Halloween Horror Nights - returning with a vengeance for its fourth instalment in October.

The theme park was most recently awarded TripAdvisor's Travellers' Choice Award, taking the Number 1 spot among theme park attractions in Asia. In celebrating this award, the theme park will be rolling out special deals to thank visitors for their support.