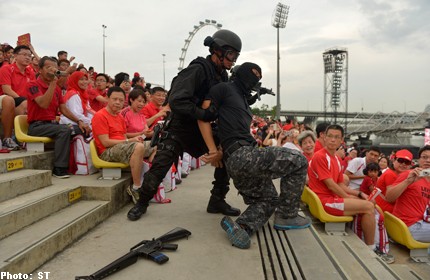 Members of the elite Anti-Swarming Team, from the Police Tactical Unit of Special Operations Command, demonstrating how a "gunman" is taken down. The simulation exercise by the police showcased how they respond to terrorist threats.

SINGAPORE - Madam Loh Lian was watching the National Day Parade on television last year when she noticed the civilian contingents marching onto the floating platform.

Inspired to do the same, the long-time employee of home- grown logistics company CWT Limited sold the idea to her bosses.

"I thought it was time we took part in the parade," she said. "At 43 years old, we're an old company. I also wanted to show that age is not a barrier."

Last night, the 65-year-old got her wish and, brandishing a flag bearing her company's name, led a contingent of 43 people.

Madam Loh was the oldest among eight female contingent commanders this year.

Altogether, there were 31 contingents consisting of 1,700 people in the parade and ceremony segment.

The action-packed dynamic defence display segment earlier showcased the country's response to land, sea and air threats. One of the highlights was the Singapore Police Force's Anti-Swarming Team's response to a mock terrorist attack, which had the crowd on the edge of their seats.

The team was made up of troopers from the Police Tactical Unit of Special Operations Command.

More than 30 pieces of defence hardware took to the stage.

These included four Mark II light strike vehicles, a compressed air foam fire engine and an armoured personnel carrier from the Singapore Police Force. These assets made their NDP debut this year.

Also grabbing attention was a Leopard 2SG main battle tank, led by 24-year-old tank commander, Captain Vivien Lee, from the 48th Battalion Singapore Armoured Regiment. On the screen, "live" point-of-view shots were shown as a tribute to the operators behind the machines.

But the spotlight was on the women in the parade.

The Singapore Polytechnic student had to go through the same selection process as the boys, which included marching under the sun for 45 minutes.

Looking up to the women in uniform, she hopes to join the Singapore Armed Forces: "My dream is to sign on as a Guards officer."