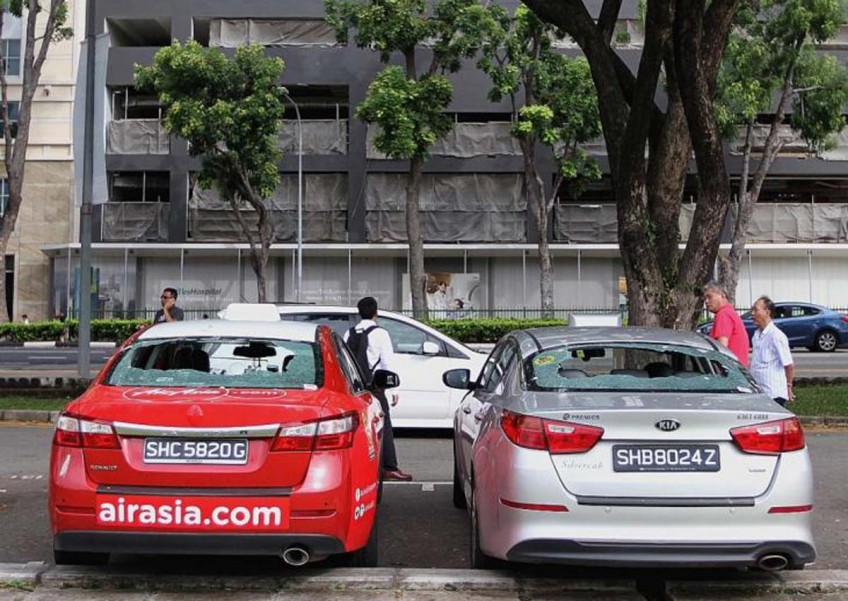 It was raining concrete on Victoria Street yesterday afternoon. Literally.

Witnesses told The New Paper that blotches of wet cement and pieces of concrete dropped on several cars near Raffles Hospital at about 3.30pm.

TNP understands that the cause was a burst pipe at the construction site for the extension of the hospital.

Nine vehicles, including at least three taxis, were hit by the concrete hail.

One affected car owner, who did not want to be named, was on his way home with his wife and two children.

He had stopped at the traffic junction of Victoria Street and Ophir Road.

He said it felt like stones were being thrown at the window.

"We were stunned," he added. "Then, as suddenly as it started, the cement hail stopped."

He got out and found that his car was badly scratched and covered with patches of cement.

But the situation was worse for other motorists around him, with some having their rear windscreen completely smashed.

He said: "I'm frustrated that this happened as I use my car every day. I don't know how long the repair will take.

"But I am also grateful that my family is safe."

Drivers of the affected vehicles went to the construction site and were directed to the open space carpark nearby where they met workers from Keong Hong Construction.

At the scene, TNP saw two construction workers talking to some of the drivers.

But the workers declined to comment when approached. Subsequent calls to Keong Hong Construction were not answered.

This article was first published on Mar 21 2017.
Get The New Paper for more stories.