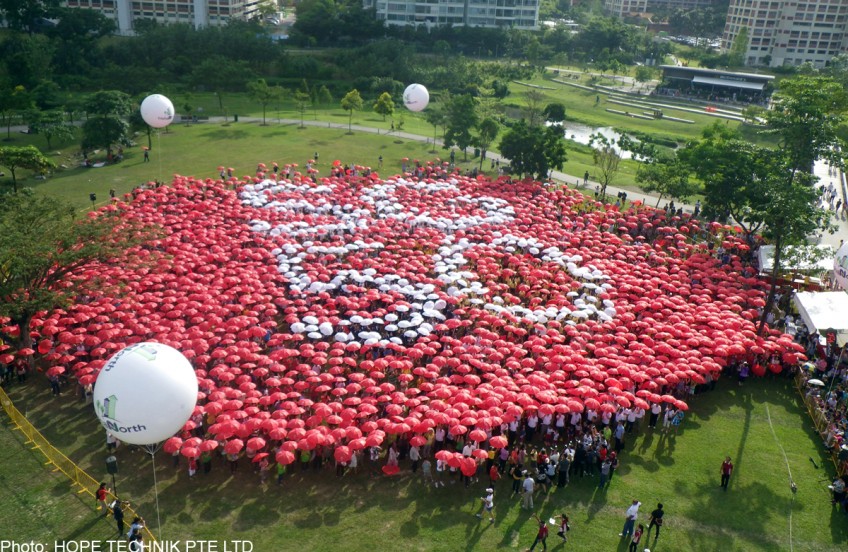 Bishan North students and residents forming Singapore’s largest SG50 logo at Bishan-Ang Mo Kio Park in January. Having built a nation, Singaporeans can focus on creating a home that is vibrant and sustainable. It would build on the original Singapore story and carry it into the next phase of its history.

A BONUS public holiday, free concerts in the park and a bigger-than-usual National Day Parade are some of the special ways Singapore is marking its 50th anniversary of nationhood this year.

But the SG50 occasion is also an opportune time to contemplate the country's journey so far and ponder on ways the Singapore story may evolve in the next 50 years.

This year is "a time to reflect on what makes us Singaporean; to bond as a people and build confidence for our future", Minister for Culture, Community and Youth Lawrence Wong said in Parliament this month.

Indeed, the vision that unified independent Singapore in its first 50 years has become less relevant as the country prepares to embark on the next 50 years.

That initial vision was of a nation which did not willingly become independent and had toiled for survival against seemingly insurmountable odds.

But with most Singaporeans now used to stability and prosperity rather than turbulence and insecurity, calls for a new narrative to take the country forward have emerged from various quarters.

In response, Prime Minister Lee Hsien Loong agrees that the Singapore story needs to move beyond the relatively simple account of a young country making its way in the world.

"I think that for the next phase the narrative cannot be just one single word like nation-building," he said in an interview with the local media in January this year.

In fact, he had signalled in 2013 a "new way forward" for the country, which he said was "at an inflection point".

Speaking at the annual National Day Rally then, he said: "Our society is more diverse, our economy is more mature, our political landscape is more contested."

While Singapore's ideals - of a just and equal society in which every citizen has a chance to succeed regardless of race, language or religion - remain the same, they need to be interpreted again "in this new phase and with a new generation", PM Lee added.

Once upon a time

SINGAPORE'S narrative in its first 50 years of independence was clear. Cast out from Malaysia and left to fend for itself, the infant nation drew on its only resource - its hard-working people - to survive and thrive.

It charted a path of remarkable economic success, going from a Third World economy centred on entrepot trade to a thriving First World industrialised nation in just one generation.

Some call it the "swamp to skyscrapers" fairy tale.

This exceptional story of nation-building is bolstered by a few supporting narratives.

First is the vulnerability theme: Singapore, a tiny island with no natural resources and surrounded by potentially hostile neighbours, is constantly teetering on the edge of obsolescence.

The country's pioneering leaders drilled into citizens the notion that the country's survival depends on the world's continued interest in its existence.

This means it must constantly strive to remain relevant in the global order.

"If we were no longer relevant to the advanced countries, then we would be reduced to agriculture and fishing," former prime minister Lee Kuan Yew said in 1996.

He added that Singapore's population would shrink back to "a fishing village of 120 people, living at subsistence level on fishing, root-staples and piracy".

Even in the 21st century, this idea has staying power.

Earlier this month, Professor Kishore Mahbubani, dean of the Lee Kuan Yew School of Public Policy, warned of the dangers of a small state like Singapore taking for granted its place in the world.

"You've really got to work extra hard to survive; you've always got to be paranoid," he said.

This need for hard work and self-reliance is a second major narrative that has been fed into Singapore's success story.

For decades, it has prided itself on its version of meritocratic principles, which reward individual effort and avoid the welfarism seen in many developed countries.

Handouts for the poor or jobless are shunned, and government benefits tend to take the form of rebates and subsidies rather than cold, hard cash.

"When people get equal handouts, whether or not they work harder or better, everybody then works less hard. The country must go down," Mr Lee Kuan Yew said in 1984.

BUT as Singapore enters a new phase, these narratives appear to be losing their resonance with the younger generation, who have never experienced the uncertainty of eking out a living.

Instead, today's citizens have moved beyond bread-and-butter issues to more sophisticated notions of identity and success, and the narratives of nationhood have had to change accordingly, as PM Lee noted in 2013.

One emerging theme is that of a more compassionate society, in which self-reliance is still valued, but the Government and the broader community offer more of a helping hand to those in need.

Since 2007, several initiatives have been introduced, including salary top-ups for low-wage earners, cash handouts for the elderly poor and a health insurance plan for all.

These mark a shift away from the Government's past stance of anti-welfarism and towards a greater effort to mitigate inequalities.

"We are seeking to build a stronger social compact for the future, a compact where personal and collective responsibility go hand-in-hand," Deputy Prime Minister and Finance Minister Tharman Shanmugaratnam said when rounding up this year's Budget debate in Parliament.

The Government is also rewriting its role to serve a modern population with different demands.

In 2012, following the worst election showing by the People's Action Party (PAP), the Government started a year-long dialogue with various groups of citizens across the country, to better understand their concerns and needs.

Called Our Singapore Conversation, its aim was to draw out people's ideas on what the national storyline should be.

But the exercise spawned a new narrative of democracy, in which the Government shows greater flexibility and responsiveness to a better-educated, more assertive electorate.

As Singapore celebrates SG50, one welcome narrative would be that even after all its accomplishments, there is still a better future ahead for the country.

Having built a nation, Singaporeans can now focus on creating a home that is vibrant and sustainable. It would build on the original Singapore story and carry it into the next phase of its history.

As PM Lee said at last year's National Day Rally: "At the heart of the Singapore Story is our belief in Singapore, belief that we can turn vulnerability and despair into confidence and hope; belief that out of the trauma of Separation, we could build a modern metropolis and a beautiful home; belief that whatever the challenges of this uncertain world we can thrive and prosper as one united people.

"Let this belief and spirit burn bright in each one of us and guide us forward for the next 50 years and more."

This year is "a time to reflect on what makes us Singaporean; to bond as a people and build confidence for our future", Minister for Culture, Community and Youth Lawrence Wong said in Parliament.

ABOUT THE BIG QUIZ

THIS primer is part of The Straits Times' initiative to discuss issues of national concern. Each Monday, the paper's correspondents will address burning questions in the Opinion section, offering unique Singaporean perspectives on complex issues.

The primers, as well as six campus talks helmed by editors and correspondents, are part of this paper's outreach programme called The Straits Times-Ministry of Education National Current Affairs Quiz, nicknamed The Big Quiz.

The nationwide event, whose presenting sponsor is the Singapore Press Holdings Foundation, aims to promote the understanding of civics among pre-university students.

Talks by ST journalists and quiz rounds will be held on:

May 6 at River Valley High School

May 22 at Tampines Junior College

May 27 at Yishun Junior College

For more information, go to www.straitstimes.com/thebigquiz