Shane Todd inquiry will not soil good relations with US: Shanmugam 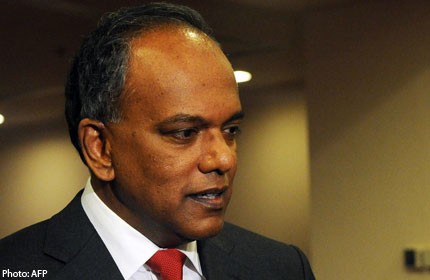 SINGAPORE - Member of Parliament, Assoc Prof Tan Kheng Boon Eugene, asked the Minister for Foreign Affairs the following questions with regards to the investigations into the death of Dr Shane Todd.

Assoc Prof Tan's questions are as follows: (a) how did the Singapore Police Force and the Federal Bureau of Investigation cooperate in the investigations into the death of Dr Shane Todd; (b) how does the Government ensure that investigations will not be influenced by external pressure and international media publicity; (c) whether, at the meeting with the Foreign Minister on 12 March 2013, US Senator Max Baucus has indicated that he and Senator Jon Tester will move legislation to block funding to the Institute of Microelectronics (IME); (d) what is the amount of funding that IME has obtained from the US Government and other US sources over the last five years; and (e) whether the findings of the process audit of IME by US officials into allegations of illegal transfer of technology, when completed, will be made public.

A public Coroner's Inquiry was held, as required by law, in May, June and July this year. A total of 74 witnesses gave evidence. The Coroner found that there was no foul play involved in Dr Todd's death and that he had committed suicide by hanging.

Our Police and the FBI have a longstanding, open and cooperative relationship. This extended to the investigation into Dr Todd's death. Both sides engaged constructively in this matter, and were committed to ensuring that the investigation was thorough and all relevant evidence was made available during the Coroner's Inquiry. The Police shared their investigation findings with the FBI, and sought their assistance in respect of some matters falling within the jurisdiction of the United States. They worked with the FBI to obtain the Todd family's cooperation and assistance in the investigations.

The discussions between the Police and the FBI were acknowledged as being "productive and forthright" by the US Embassy in its press statement on 21 March 2013. We were always clear, however, that the FBI had no power to intervene in the investigations, which were strictly under the purview of the Singapore Police Force. US Secretary of State John Kerry and US Attorney-General Eric Holder both understood that the FBI had no jurisdiction over investigations in Singapore. They therefore appreciated the extra steps that our Police had taken to share the evidence and their investigative findings with the FBI.

One of the features of this case was that there was intense media speculation even before the inquiry had begun. On 15 February 2013, an article was published in the London edition of the Financial Times entitled "Death in Singapore", written by Raymond Bonner and Christine Spolar.

In that article, the authors made wide ranging claims against Dr Todd's employer, the Institute of Microelectronics (IME). These claims were based on unsubstantiated speculation, and impugned the integrity and efficacy of the Singapore Police Force. Our authorities chose not to respond to the various allegations made prior to the Inquiry, as they recognised that the truth could only be arrived at through a careful examination of the evidence, and not through speculation and sensationalist reporting. Dr Todd's family participated in the inquiry and had the opportunity to raise their concerns.

However, as members will know, they walked out of the inquiry after their key witness Dr Edward Adelstein changed his original testimony and confirmed that Dr Todd was not killed by garrotting. Even though the family walked out of the inquiry, their written statements were presented to court in their absence, and the issues they raised were comprehensively dealt with by the Coroner in his written 42 610 findings. Members may wish to know, that Mr Bonner also left the inquiry pre-maturely, soon after the parents had walked out.

Given the serious allegations about illegal transfers of US technology to the Chinese company Huawei, we also made the offer to host a US team to conduct a process audit at IME for the US to satisfy itself that we take the protection of intellectual property rights very seriously. The audit has been conducted. We have not received any follow-up questions from the US so far.

Minister Shanmugam had met with the Montana Senator Max Baucus during his visit to Washington DC, and conveyed the same assurances and offers as he did to Secretary Kerry and US Attorney-General Holder. He informed Senator Baucus that the Todd family would be invited to attend the Coroner's Inquiry during which they could question the witnesses as well as the investigative findings and forensic reports. He also pointed out that Dr Todd was involved in only one minor project with Huawei which did not involve Gallium Nitride - the substance which has fuelled the wild media speculation on the nature of IME's work with Huawei. The value of the nine-month project was less than S$15,000, and Dr Todd's actual involvement in this project was only over a few days. While IME did discuss a possible project with Huawei involving Gallium Nitride, this project never materialised.

Senator Baucus did not inform Minister Shanmugam during the meeting of his intention, together with Senator Jon Tester, to table the Amendment to the Continuing Resolution which will block US funding to IME. In view of the assurance Minister Shanmugam had already given, and Singapore's long track record of taking our public commitments seriously, we were of course deeply disappointed when we learnt of it. We gave our response on 17 March 2013. However, we must understand that the US has its own unique political culture which imposes its own demands on its legislators. The US Senate has since passed the Continuing Resolution without the Senators' amendment. Members will draw their own conclusions from this.

With regard to the Member's question on US funding received by IME, IME is a national research institute funded by and under the purview of A*STAR. It receives about S$53 million of research funding annually from A*STAR. In addition, the institute receives another S$10 million annually in funding through joint project collaborations with industry and other research organisations. Over the last five years, IME received a total of just under S$875,000 of research funding from US government sources. The funding IME received from the US entities was for research collaborations conducted with them.

In summary, the Singapore Government made every effort to be open and cooperative, which the US Administration appreciates. Following the delivery of the Coroner's findings, the US Embassy released a statement on 8 July 2013 describing the Coroner's Inquiry as "comprehensive, fair and transparent". We have to understand that the American political system is such that its Congressmen often have to take steps like those taken in this matter. We are however not a country that bows to external pressure or media reports as our long track record has shown. The US Administration knows well that Singapore has a longstanding, open and strong relationship with the US based on shared interests and mutually beneficial cooperation in many areas, including economic, defence and security. We do not believe that the US Administration would jeopardise this strong relationship on the basis of inaccurate allegations.

What was expected by the US Administration, and which is also our own expectation, is that this matter be dealt with transparently and in accordance with the rule of law, and that we do everything to get to the truth. This has been done and as such, we do not expect that this incident should have any bearing on our good relations with the US. PM Lee had a good visit to the US in April, where he had useful discussions with President Barack Obama, Vice President Joe Biden and other leaders within the US Administration, on bilateral cooperation and developments in the region. We were also pleased to welcome Vice President Biden to Singapore last month, where he had good meetings with the President, PM and former Minister Mentor Mr Lee Kuan Yew. This exchange of visits at the highest level is a strong reflection of the state of our bilateral relationship with the US.