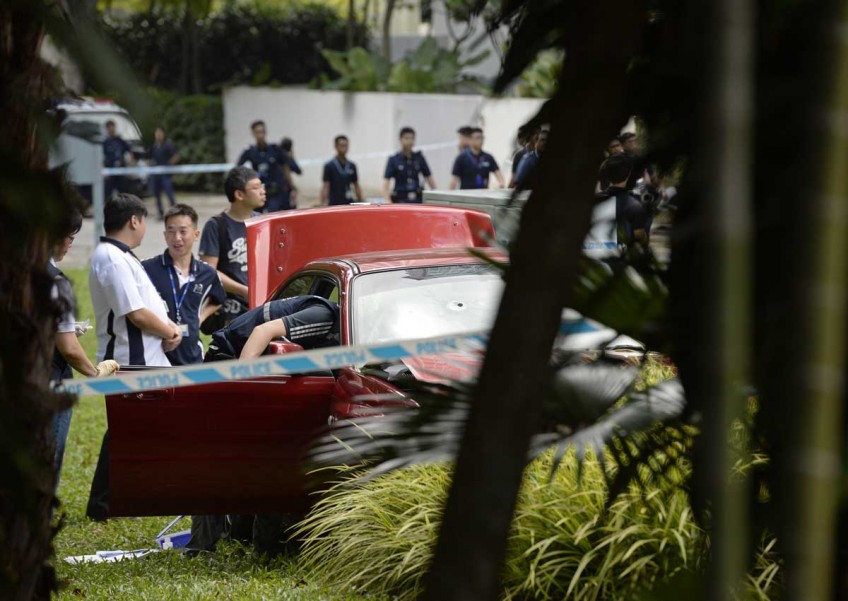 Despite repeated warnings to stop his car at a tight security net placed around the Shangri-La Hotel in the early hours of May 31 last year, a 34-year-old man accelerated the vehicle and crashed it through a concrete security barrier.

This prompted two Gurkha Contingent officers guarding a final layer of security just outside the hotel to fire five shots to stop the vehicle, a Coroner's Court heard yesterday.

The driver, Mohamad Taufik Zahar alias Ben, died from a single gunshot wound to the back of his upper right ear. The bullet fragmented upon impact and there was no exit wound.

The area around the hotel had been placed under a tight security net from May 28 to 31, as it was hosting the Shangri-La Dialogue, a major security summit attended by defence ministers and military chiefs from 27 countries.

Given its "significant potential as a prime target for terrorist attacks", the police set up a high level of security for the event, State Counsel and Second Solicitor-General Kwek Mean Luck told the court.

Among other things, there were road blocks and security checks on people and vehicles at and around the venue.

The road blocks involved an initial check, detailed inspections and concrete crash barriers. Beyond these, there were a pair of armed Gurkha Contingent officers who were "deployed to use all lawful means to prevent any vehicle from crashing through the barriers", Mr Kwek said.

The court heard from Deputy Superintendent of Police Roy Lim that around midnight on the day of the incident, Taufik and his friends - Muhammad Syahid Mohamed Yasin, 27, and Mohamed Ismail, 32 - had gone to Geylang to look for prostitutes.

Taufik, who did not have a valid driving licence, had quarrelled with his wife and had taken, without her consent, the keys to a red Subaru Impreza she had rented.

He was also wanted for failing to attend court to face charges of theft, drug consumption and criminal intimidation.

Unable to find any prostitutes, the trio decided to head to Orchard Towers instead.

But Taufik missed a turn, and had to drive through Ardmore Park.

At about 4.17am, he drove past an auxiliary police officer, ignoring his signal for him to slow down.

The car later stopped before a second auxiliary police officer who directed them to proceed to a vehicle check station.

Syahid, who was in the rear centre passenger seat, appeared agitated and asked the officers through the window why they were being checked. Then, he shouted at Taufik: "Jalan! Jalan! (Go! Go!)"

As the car accelerated, one of the officers tapped on the windows repeatedly and shouted for them to stop but to no avail. The other policeman shouted "crash through" twice to alert other officers.

On seeing the car accelerating towards the final line of concrete barriers, the two Gurkha officers stepped off the kerb where they had been stationed at and moved towards it.

As the car crashed through a concrete barrier, a police inspector sounded the air horn and shouted "dash through" several times.

The Gurkha officers raised their weapons at shoulder-level and shouted "Police, stop!" repeatedly as they walked towards the moving car.

As the car turned left, after crashing through the concrete barrier, one of the Gurkha officers fired a shot at the driver.

The car did not slow down, prompting the second Gurkha officer to fire two shots in quick succession.

But the vehicle still did not stop and the officer fired another two shots at the driver.

The final shot hit Taufik, and the car then slowed to a crawling speed and veered to its right.

Mohamed and Syahid fled from the car, which later came to a standstill on a grass verge near the junction of Anderson Road and Orange Grove Road.

Mohamed was arrested and found to have 78 Erimin-5 tablets as well as sachets of heroin and methamphetamine.

He admitted that a pouch in the car, which contained 17 Erimin-5 tablets and two packets of methamphetamine, belonged to him.

Taufik also had traces of methamphetamine and Erimin-5 in his body.

The coroner's inquiry is set to continue today.